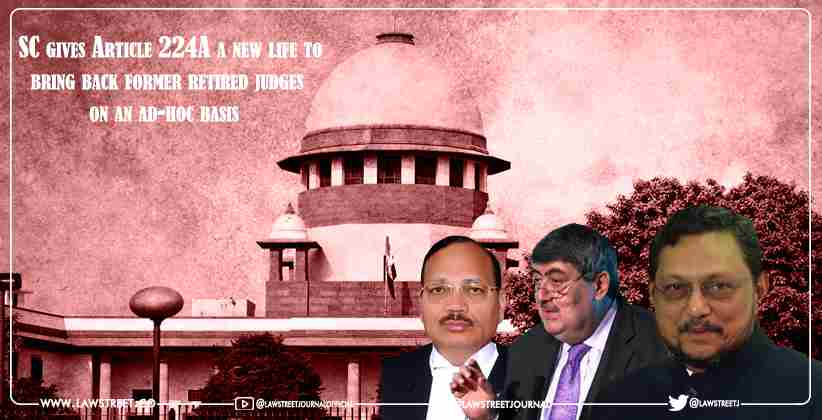 Judiciary Apr 22, 2021 Shreyas Nair ( Editor: Ekta Joshi ) 4 Shares
4 Shares
The Supreme Court on Tuesday (April 20, 2021) re-initiated Article 224A of the Constitution, which had been inactive for 58 years, allowing high court chief justices to nominate retired HC judges as ad hoc judges for two to five years if the High Courts (HCs) face a backlog of cases.

A bench of Chief Justice S A Bobde, Justices S K Kaul and Surya Kant took the historic step of laying out a formal enforcement of Article 224A, which was present in the original Constitution but was removed in 1956 and reintroduced in 1963. In the last five decades, only three ad hoc judges of HCs have been named for a term of one year each—Justice Suraj Bhan in the Madhya Pradesh HC in 1972, Justice P Venugopal in Madras HC in 1982 and Justice O P Srivastava in the Ayodhya case in 2007. In this respect, only three retired judges have been appointed.

The CJI-led bench said that the trigger point for a High Court chief justice to invoke "Article 224A" may be several things— (a) if vacancies are more than 20% of the sanctioned strength, (b) cases in a particular category are pending for over five years, (c) more than 10% of the backlog of pending cases are over five years old, (d) the percentage of rate of disposal is lower than the institution of cases either in a particular subject matter or generally in the court, and, (e) even if there are not many old cases pending, but depending on the jurisdiction, a situation of mounting arrears is likely to arise if the rate of disposal is consistently lower than the rate of filing over a period of a year or more.

However, the bench said, "The use of Article 224A is not intended to be a substitute for daily appointments. To emphasise this point, we state that if no proposals have been made for more than 20% of daily vacancies, the trigger for resorting to Article 224A will not be met.   We have little doubt that the task of mounting arrears and current vacancies necessitates using Article 224A of the Constitution to select ad hoc judges, who are a ready pool of talent, as a technique, particularly for clearing old cases (of course subject to their concurrence). They will focus on old cases that have been trapped in the system and will need more training." The government had informed the Supreme Court that HC CJs could use Article 224A if they wanted to. However, before drawing on the dormant provision for appointing ad hoc judges, the HC collegiums must first fill the current vacancies. The Supreme Court was firm that appointing ad hoc judges under Article 224A was not a panacea for the failure to make routine selection recommendations. According to the National Judicial Data Grid (NJDG), 56.4 percent of pending cases were brought in the last five years, with 40% being filed between the ages of five and twenty. According to the report, the primary aim of appointing ad hoc judges was to comply with the above series of cases that had been pending for more than five years.

"Our nation is experiencing a docket explosion, making it impossible for adjudication to take place within a suitable time frame" This crisis scenario must be dealt with. The rule of the game is that some level of creativity is often needed. In the current sense, maybe a slightly different perspective on the apparent purpose of Article 224A providing for ad hoc judges is needed. As previously said, we are confronted with the ground reality of almost 40% vacancies left in routine appointments (both permanent and new judges) over the last two years," the bench added.

Further, according to the Bench, "This may not eliminate the need for ad hoc judges, but it does endorse the idea that even though there are few vacancies, a condition may occur that necessitates the appointment of experienced judges as ad hoc judges. Calcutta HC, on the other hand, has one of the biggest vacancies for daily appointments (44 percent) but less than half the arrears as Madras (2.7 lakh) "in certain cases)". As a result, bringing the appointment process to such numbers as will be able to cover the current and upcoming vacancies remains an unfulfilled challenge. "Without attempting to place responsibility on anybody, the fact remains that there are many reasons for the same," the bench concluded.