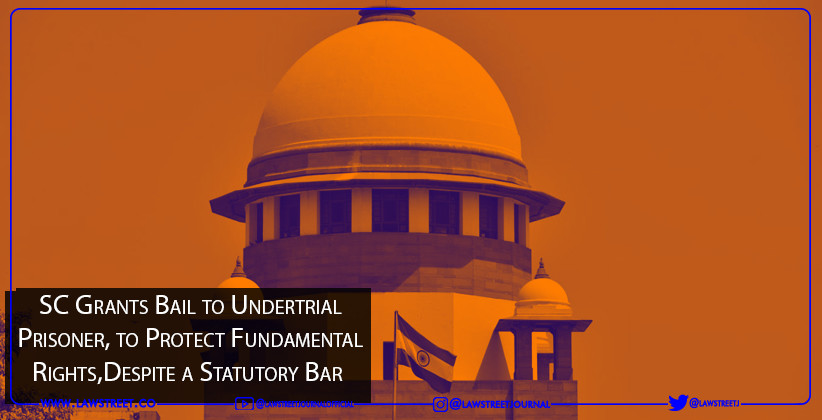 Judiciary Feb 04, 2021 Mathews Savio ( Editor: Ekta Joshi ) 9 Shares
9 Shares
Undertrials constitute more than 70% of prisoners in Indian jails and their numbers are rising. The overcrowding in prisons has received renewed attention during the pandemic but little has been done to improve their lot.

Often there are delays in presenting the undertrials before the concerned courts for grant of bail due to shortage of policemen to escort them and even due to shortage of hand-cuffs. Many of those granted bails cannot furnish surety and continue to languish in jail. These impediments to the access of the legal system cause violation of the fundamental right to liberty of the prisoners guaranteed under Article 21. In its judgement in Union of India v. K. A. Najeeb CRIMINAL APPEAL NO. 98 of 2021 the Supreme Court asserted the rights of the undertrial prisoners. The Court reiterated that the fundamental rights of undertrial prisoners are to be protected despite a statutory bar to the grant of bail. The court held that in statutes related to grievous offences like terrorism or narcotics bar against grant of bail is provided in consideration of the societal impacts that might arise if the accused are allowed to roam free but this restriction has to be balanced by a speedy trial so as not to affect the rights of the accused.

The respondent in the case is an undertrial prisoner booked in connection with an incident that happened in 2010 where the right-hand of a college Professor was chopped off by a group of miscreants. The respondent along with other members of the Popular Front of India (PFI) was by their act avenging purportedly blasphemous content in a question paper set by the victim. The other members were caught and tried under several sections of the Indian Penal Code, 1860, the Explosives Act, 1884 and the Unlawful Activities Prevention Act, 1967 but the respondent was absconding. Some of the accused in the case were acquitted and others sentenced for varying terms the maximum sentence awarded being eight years. The Respondent was arrested in 2015 and was alleged to be one of the main conspirators. The National Investigation Agency has filed a charge sheet against him invoking Sections 153A, 201, 202, 212 of Indian Penal Code,1860 along with Section 16, 18, 18-B, 19 and 20 of the Unlawful Activities Prevention Act, 1967 under which he is facing trial.  The Respondent has approached the Special Court and the High Court for bail as many as six times between 2015 and 2019, by which the time he had been incarcerated for more than four years. Bail was denied each time except the sixth time where the Kerala High Court granted the bail citing the delay in starting a trial. However, the High Court did not look into the explicit bar for grant of bail under Section 43-D (5) of the Unlawful Activities Prevention Act, 1967. The Union of India representing the National Investigation Agency appealed the bail order in the Supreme Court.

In the appeal, it was argued that the Respondent, if let out, may tamper with the evidence or again be absconding. It was also argued that the High Court erred by not looking into the statutory rigours of Section 43-D (5) of the Unlawful Activities Prevention Act, 1967. The appellants asserted that the quilt of the accused can be prima facie believed.

The Respondent’s counsel argued that many of the co-accused have been acquitted and even those convicted have been awarded only a maximum sentence of eight years. The Respondent has already been imprisoned for five-and-a-half years and there is no hope for initiation of trial anytime soon. Relying on the judgements in Shaheen Welfare Association v. Union of India (1996) 2 SCC 616 and Hussain v. Union of India (2017) 5 SCC 702 it was argued that protracted incarceration violates the respondent's right to a speedy trial and access to justice; in which case, Constitutional Courts could exercise their powers to grant bail, regardless of limitations specified under special enactments. In its judgement, the Supreme Court observed that the parameters guiding the decision of the court in an application for bail and cancellation of bail are different. While deciding on the application for bail only reasons are to be mentioned and the merit of evidence need not be looked into. But the cancellation of bail once granted by the same court will require coming to light of some new evidence or circumstance failing which an appeal must be filed in a higher court. Once discretion is exercised by a High Court to grant bail the Supreme Court normally does not interfere unless it is found that such discretion was exercised on extraneous considerations or that relevant facts were neglected.

Referring to the judgment in Supreme Court Legal Aid Committee Representing Undertrial Prisoners v. Union of India (1994) 6 SCC 731 the court observed that undertrials cannot indefinitely be detained pending trial. Ideally, no person should be made to suffer any adverse effect until his guilt is proved. It is only owing to the practical difficulties in letting free a possible criminal in the society that the courts have to decide on the question of bail. If it is proved that the trail cannot be expected to finish in a reasonable period courts are usually obligated to enlarge the accused on bail. Further, the court held that the limitations on the grant of bail under Section 43-D (5) of the Unlawful Activities Prevention Act, 1967 will not oust the power of the Constitutional Court in case of violation of fundamental rights. The court said that there is no necessary conflict between this section and the powers under the Constitutional jurisdiction of the court to guarantee fundamental rights. As far as access to a speedy trial is ensured the limitations under Section 43-D (5) of the Unlawful Activities Prevention Act, 1967 can be held valid but once that is not possible then courts must protect the fundamental rights of the citizens. In dismissing the appeal, the court added weight to the maxim ‘bail is the rule; jail is the exception’. The judgements rightly address the violations of the rights of the undertrial prisoners in Indian prisons and the inordinate delays in access to justice. The higher status of the constitutional guarantee of life and liberty of the citizens was once again asserted by the court. The judgement sets the right precedent for future bail applications and aids the protection of rights of the undertrials.   [READ ORDER]