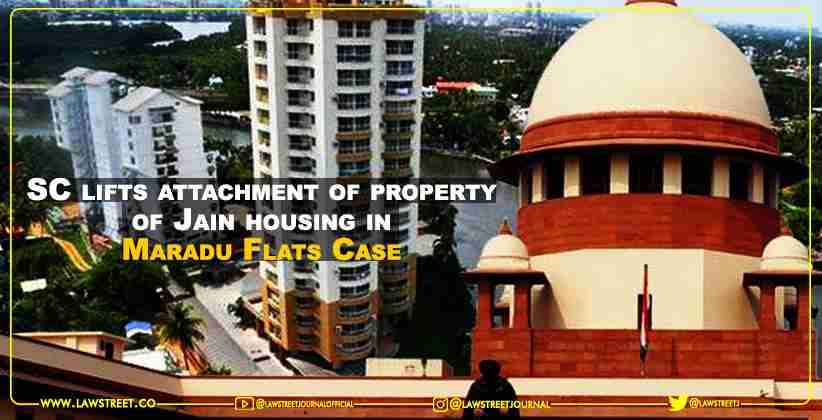 The Supreme Court of India in May, 2019 had served an order to remove all the structures which were built in violation of Coastal Regulatory Zone Regulations within the prohibited area of CRZ category in Maradu Municipality of Ernakulam District in Kerala.

After which, in September, 2019, the Court had appointed Justice K Balakrishnan Nair, former judge of High Court of Kerala, to head the committee for deciding the actual amout of compensation payable to the owners of flats in the four apartments in Maradu,etc. which had been ordered to be demolished for CRZ violations, additionally serving a notice to the four builders in the proceeding and their properties and bank had been attached.

In the most recent development, the Supreme Court has directed lifting of attachment in respect of properties and bank account of Jain housing Ltd., its sister concerns and the Directors of the companies, except for land in Chillavanoor. The court also issued clarification and observed that Jain Housing is restrained from dealing with the same in any manner.

The division bench comprising Justices Navin Sinha and Ramasubramanian, granted liberty to applicants to approach RERA Authorities for registration of other projects naturally to be considered by RERA independently in accordance to law and further noted that Jain Housing, in pursuance of Court’s previous order has deposited 6.12 crores as the first installment and assured that remaining amount will be positively deposited in stipulated period.

The Bench noted submissions of Amicus Curiae Gaurav Agrawal, Senior Counsel Sidhartha Dave for applicant, and Ms Meenakshi Arora for concerned home buyers, Senior Advocate R. Venkataramani, for the State of Kerala and other counsels. The Amicus Curiae informed that 2 crores were deposited, 50 lakhs was given to State as administrative expenses, so 1.5 is left with the committee which is in fixed deposits. The bench observed that the total amount deposited may be disbursed pro rata to flat holders and agreement holders of Jain Housing, which will be 47% of their duties.

Furthermore, the court also allowed Jain Housing’s request to approach High Court with its prayer seeking quashing of criminal proceedings and to seek remedies before the High Court.