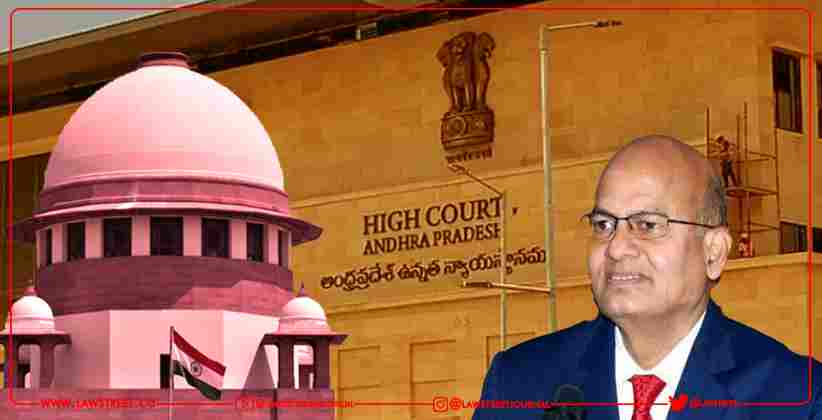 The Apex Court said that it will pronounce judgment in the case on April 12, 2021. The former High Court judge has petitioned the Supreme Court to overturn an order of the Andhra Pradesh High Court ordering a judicial investigation into an alleged phone call between him and a District Judge planning "conspiracy" against the Chief Justice of the High Court and a sitting Supreme Court Judge. The application was filed stating that the mobile phone of District Judge Ramakrishna, with whom Eshwaraiah was allegedly having the conversation, was lost. The Court recorded that Luthra had submitted that Case Crime No. 401/2020 under Sections 467, 468, 471, 406, 420 r/w 34 IPC.

Justice Ramakrishna was arrested and certain materials were seized from him which also included an iPhone. He further submited that the iPhone was stolen from custody of the police station i.e. the state custody, which was relevant to the problems raised in this petition.

The Court stated that the seizure and theft of the iPhone had nothing to do with the current proceeding and that it was up to the concerned party, Ramakrishna, to take suitable legal action. The court then decided to decide on the case. Luthra submitted that the dispute emerged when the listening system on which the suspected communication was captured had gone missing from police custody,

He said in the hearing, "How is it that these machines are stolen from the police department in those cases?" In the end, the entire problem is about the order that was being contested. The current investigation is based on evidence that has gone missing. Luthra argued this indicates that this is all that can be taken into account. This is what the Court should consider before passing the Order."

The Court, however, was not convinced and proceeded to dismiss the matter. At the previous hearing, the SC deferred pronouncement of the judgment in the matter after being apprised by Senior Advocate Kapil Sibal that an Application had been filed relating to the seizure of the phone of District Judge Mr. S. Ramakrishna with whom Justice Eshwaraiah was allegedly speaking.

During the hearing, Advocate Prashant Bhusha claimed that the impugned order was issued by the High Court. Senior Advocates Harish Salve and Kapil Sibal represented intervenors who rejected Justice Eshwaraiah's appeal. Previously, the Court had asked Justice Eshwaraiah to file an affidavit in connection with an alleged private phone call with Mr. S. Ramakrishna, a suspended District Munsif Magistrate in Andhra Pradesh.