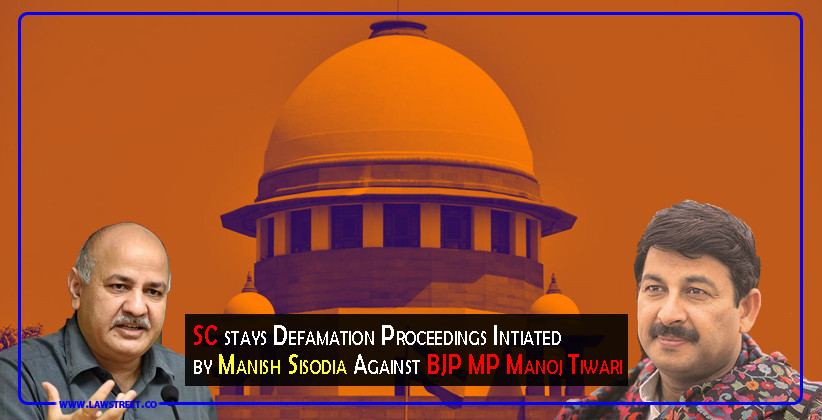 The three judge bench was headed by the Chief Justice of India. The other two judges were Justice A.S. Bopanna and Justice V. Ramasubramanian. The bench passed an interim order while issuing notice on the special leave petition filed by Tiwari who challenged the judgment of the Delhi High Court, which refused to quash the summoning order in Sisodia's defamation complaint.

BACKGROUND OF THE CASE: A defamation case was filed by Sisodia in 2019 against BJP leaders - Members of Parliament Manoj Tiwari, Hans Raj Hans and Pravesh Verma, MLAs Manjin jinder Singh Sirsa, Vijender Gupta, and Spokesperson Harish Khurana for allegedly making defamatory statements about his involvement in corruption of nearly Rs 2,000 crore in the building of classrooms in Delhi's government schools. Sisodia did so when Harish Khurana had filed a Right to Information (RTI) query seeking details of the Delhi government’s expenditure on classrooms in government schools. Tiwari held a press conference citing the information received in the RTI reply. He called into question the expenditure incurred out of funds of the public exchequer. He had also posted a tweet asking the Aam Aadmi Party (AAP) government to clarify the same. After the case filed by Sisodia, a summon was issued by a Special MP/MLA Court to all the leaders mentioned above. By an order pronounced on December 17, 2020, the Delhi High Court had dismissed Tiwari's plea.

“Statements and imputations harmed the reputation of the Minister and the defence of Tiwari can be considered only at the trial stage,” the high court said.

ARGUMENTS MADE BY TIWARI: The stay was granted after Senior Advocate R Venkataramani, representing Tiwari said that Sisodia could not have filed a defamation petition without going through the Section 199(2) of the Code of Criminal Procedure, 1973.

As per section 199(2), when defamation is against the President, Vice-President, Governor, a Minister or any other public servant with respect to discharge of his/ her official functions, then a Sessions Court may take cognizance of such offence, without the case being committed to it, upon a complaint in writing made by the Public Prosecutor.

However, the complaint was filed by Sisodia invoking Section 199(6) CrPC, which says that the section does not affect the right of a person, against whom the offence is alleged to have been committed, to make a complaint before the jurisdictional magistrate. It was argued that the summoning order was issued without jurisdiction as recourse under Section 199(6) cannot be taken directly by a public servant without following the scheme of state sanction under Section 199(2) of CrPC,1973. It was also argued that the entire case was based on legally inadmissible evidence such as newspaper reports. Even the evidence in the form of CD etc was filed without the requisite compliance of the parameters of Section 65B of the Indian Evidence Act, 1872.  Tiwari also contended that allegations were made with respect to the public documents filed through RTI replies. He also contended that therefore, the summoning order was issued without jurisdiction. Even the statements were made in good faith according to him, exceptions regarding the conduct of a public servant as per Section 499 of the Indian Penal Code, 1860. Sisodia submitted that this was not the stage to test the admissibility of evidence. Supreme Court, acting on the matter decided to put a stay on the proceedings.   [READ ORDER]