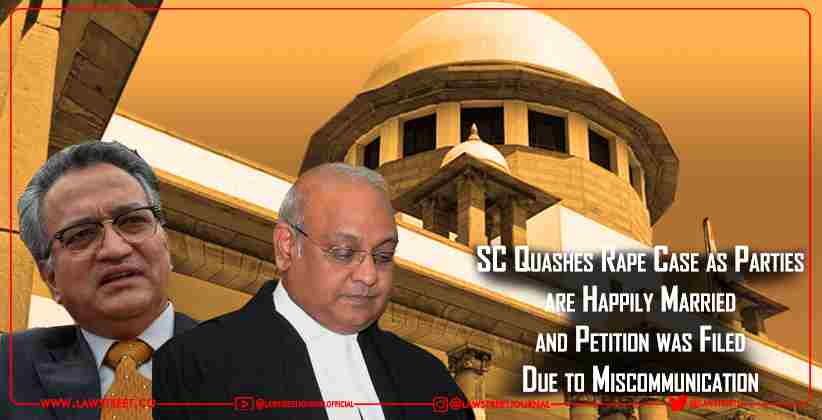 Judiciary Apr 19, 2021 Mathews Savio ( Editor: Ekta Joshi ) 8 Shares
8 Shares
The Supreme Court by its order dated April 12, 2021, quashed a rape case pending before it on a joint request by both parties to the petition.

The case came before the apex court in an appeal from the judgement of the Delhi High Court. In the original petition, it was alleged by the petitioner that the accused raped her with a false promise of marriage.  The parties pleaded that the petition was filed due to a miscommunication and that they are now happily married. The parties asked the court to quash the petition under the inherent powers of the High Court under Section 482 of the Code of Criminal Procedure, 1973.

The High Court believed that the offence of rape like other offences like dacoity, murder etc did not only affect the individual parties but the society as a whole. On this reasoning, the High Court did not entertain the prayer of the parties.

The High Court observed that: "Rape not only causes serious injury to a woman's body, her honour and dignity and even if such an offence is settled by the offender and victim, this offence being not private in nature but has a serious impact on the society and, therefore, cannot be quashed."

On appeal before the Supreme Court, the matter was heard by a bench comprising Justices AM Khanwilkar and Dinesh Maheshwari.  The appellant in the Supreme Court argued that the offence of rape committed by the promise of marriage is different from other forms of rape and is like a crime between the parties. Here the sexual intercourse was consensual, unlike cases where the intercourse is forceful and without consent.  The parties further informed the court that they are happily married and the petition was filed on a misunderstanding.  The court on consideration of the submissions decided to quash the proceedings under the case and directed that all reference about the case be removed from the records.

While pronouncing its judgement the bench observed that: “Considering the nature of allegations in the FIR and the realization of the fact that due to miscommunication FIR came to be registered at the relevant point of time which issues/misunderstanding have now been fully resolved and the parties are happily married since 11.10.2014, the basis of FIR does not survive. Rather registering such FIR was an ill-advised move on the part of the private respondent, is the stand now taken before us. It is seen that the appellant and private respondent are literate and well-informed persons and have jointly opted for quashing of the stated FIR.”

Further, the bench observed that justice will not be served if the joint request for quashing of FIR is not allowed by the court in the peculiar facts of the present case.    [READ ORDER]