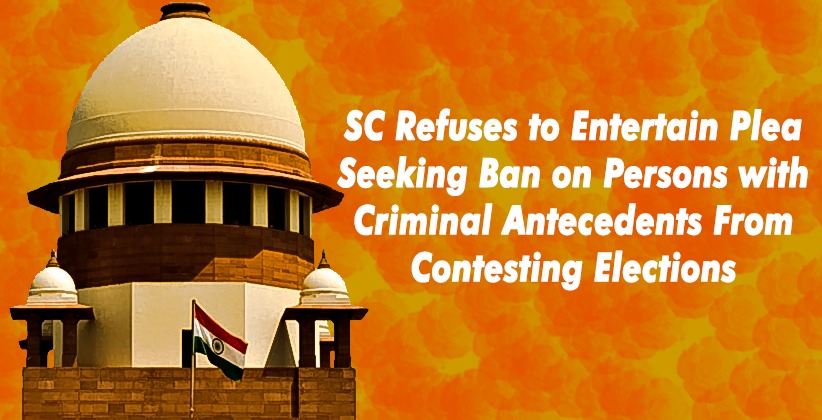 An issue was raised before the Supreme Court by Advocate SN Shukla to put a ban on persons from contesting elections who have been charge-sheeted by courts or have been convicted with imprisonment for over 5 years. He said that the number of people with a criminal background is increasing in the parliament and hence some new rules must be made regarding their disqualification to hold elections. He also pointed Section 100 of The Representation of the People Act, 1951 which too provides for the grounds for declaring election to be void.

On November 16, 2020, the Supreme Court comprising the bench of Justices L. Nageswara Rao, Hemant Gupta, and Ajay Rastogi refused to entertain the petition and held that no new rules can be introduced and that people with criminal background cannot be disqualified from contesting elections. It held that since the matter was the domain of the parliament, the petitioner could follow any remedy available for bringing into force the directions issued earlier by the court.

Shukla pointed out that the parliament will never pass any such law as it is already filled with criminals majority. Earlier also it had failed to implement the recommendation given by the top court in the Public Interest Foundation of India vs Union of India.

But the court keeping in view the petition asked the parliament to make laws that would prevent any candidate who is accused of serious crime from entering politics.