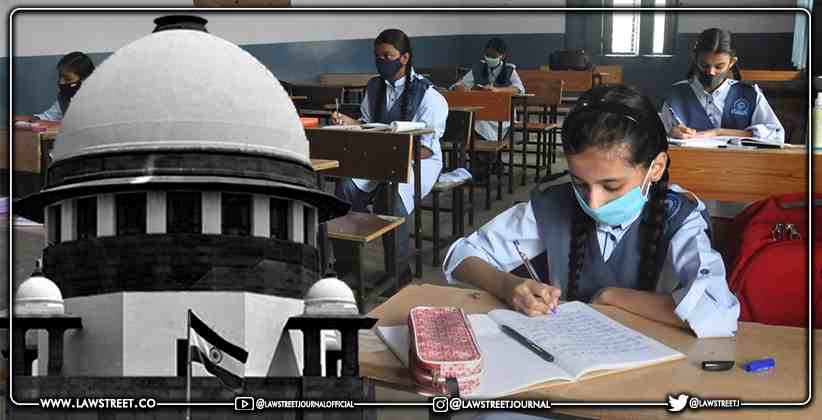 On Monday (September 19, 2021), the Supreme Court rejected the writ petition of a Delhi based school student asking the Court to direct the State and Center for providing a speedy decision in regard to starting physical classes with appropriate safeguards.

OBSERVATION  OF THE JUDGES

The matter was brought in front of the Bench of Justices D. Y. Chandrachud and B. V. Nagarathna who commented that the student should discuss the matter of physical reopening of schools with the state in which he is based, i.e. Delhi.

Furthermore, the judges the counsel told the counsel that their client should focus on his studies instead of filing for constitutional remedies. He mentioned that the petition was misplaced and children must not get involved in such matters while emphasizing the fact that he is aware that the said petition is not a public gimmick. He also pointed to the fact that the situations in different states are different and therefore, this decision varies from state to state.

RATIONALE BEHIND THE OBSERVATION

INTRODUCTION OF ARTICLE 21 A

The judge further added that after the inclusion of Article 21 A it is the duty of the State to ensure that every child is provided with free and compulsory education between the ages of 6 to 14, however, the means for the same can be decided by the State.

Therefore, this implies that the state governments are answerable to such appeals and it is their discretion as when and how they wish to reopen schools. The court cannot issue orders for the states to reopen the schools.

Another point which the judge emphasized was that the country has recently gone through the second wave and there is still a possibility of a spike in cases even though the vaccinations are rapidly taking place but it is still dangerous and therefore the court cannot grant such a kind of relief to the petitioner.

The Bench held that in these kinds of matters governance is extremely complex and therefore, the court should not pass orders to make the governance even more difficult than the original problem.

The Judge while emphasizing the fact that this matter should be dealt with by the states held that the discretion should be given to the state governments since they are much more aware of their areas and are familiar with the data of the COVID patients. The judge upheld the character of the state governments saying that they would want their students to go to school since that is the most basic function of the local authorities.

In his statements, Justice Chandrachud also furnished that there are various matters which play a huge role in this decision such as they have to consider the interest of other student’s as well in this scenario.

The government has decided to vaccinate the children, and a major part of this appeal depends on what kind of vaccine the State is introducing for the children.

The State has decided to reopen the school for the students studying in standard 9th,10th, 11th and 12th. The judiciary cannot dictate the states to open schools even for the 1 st standard students.

The judge further held that the Court must deal with the issue cautiously as the states are treating it since it is a sensitive issue of social policy and their order may expose young children to COVID.

They cannot issue such orders especially because the Court and the petitioner have limited data and scientific knowledge which makes granting such reliefs to the petitioner very dangerous for the society.

The Bench held that the petition cannot be entertained in the Supreme Court and allowed the petitioner to withdraw it, however, allowed them at the same time to file a petition in the High Court. The petition was dismissed as withdrawn.

Judiciary Oct 22, 2021 Lawstreet News Network ( ) 33 Shares
33 Shares
SupremeCourt refuses to grant bail to a man accused for offences punishable under Sections 307, 452, 384, 387/120-B IPC and Sections 3/25, 5/27 and 35 of Arms Act.Justice Kant- It’s a clear case of of misusing a concession of a bail says the Supreme Court while hearing a matter related to bail.Petitioner- Even the charges have not been framed in this case milord. I have been languishing in jail for the last two & a half year.Adv Gurkirat Gaur for State of Rajasthan- He is the habitual...
Read full post