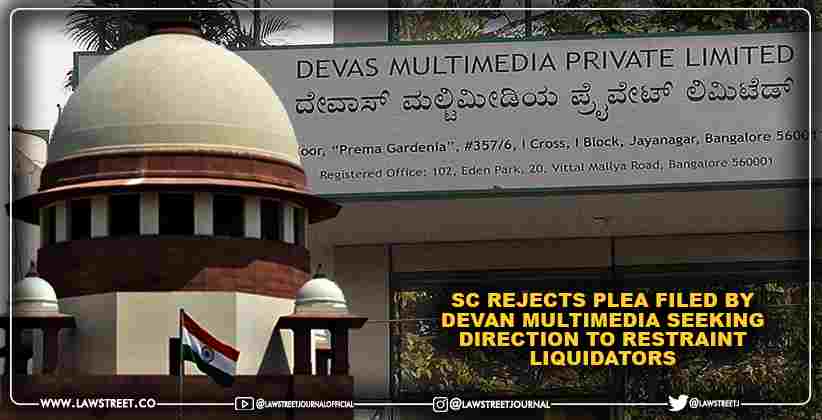 The Supreme Court on Tuesday, June 15th, 2021, rejected the plea filed by Devas Multimedia seeking direction to restrain liquidators from taking any step in the arbitration pending before the Delhi High Court between Devas and Antrix Corporation Ltd.

The plea before the Delhi High Court seeks to enforce an international award for $562.5 million plus interest in its favour. It is to be noted that the bench of justices Hemant Gupta and V Ramasubramanian declined to issue any interim order and asked Devas to go back to the National Company Law Appellate Tribunal (NCLAT) where its appeal is pending.

The Bangalore bench of NCLT had earlier in May, had ordered liquidation of Devas citing reason that the company was incorporated in a fraudulent manner to siphon finds to foreign accounts, additionally directing the official liquidator attached to the High Court of Karnataka to take expeditious steps to liquidate the company so as to keep the company from perpetuating its fraudulent activities and abusing the process of law by enforcing award passed by International Chamber of Commerce against Antrix in 2015. The tribunal noted that Antrix’s petition fulfilled the requisites under the Company’s Act to pass winding order against Devan.

In November 2020, the Supreme Court had stayed the proceeding to execute the award passed by ICC directing Antrix to pay of $ 1.2 billion compensation to Devas for terminating the 2005 contract.