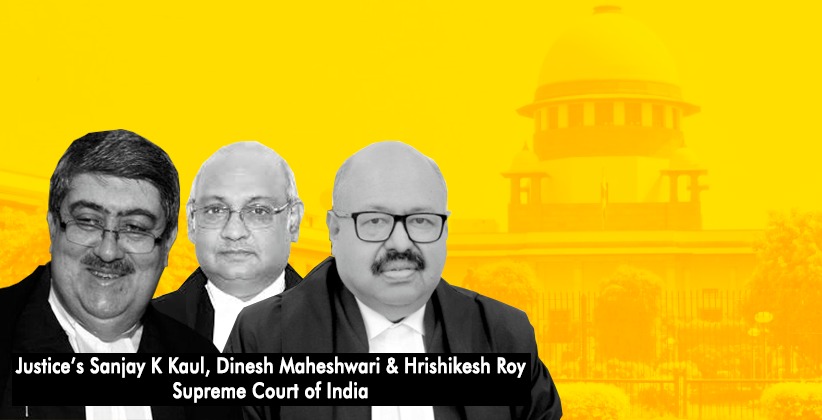 Judiciary Dec 29, 2020 Dev Kumar Patel ( Editor: Ekta Joshi ) 6 Shares
6 Shares
The Supreme Court observed that gratuity money of an employee can be withheld and forfeited in case of recovery of dues such as overstaying in official accommodation.

A bench headed by Justice Sanjay K Kaul held that there is no prohibition against recovering dues including penal rent -- the rent with the penalty for overstaying in official accommodation -- from an employee’s gratuity. The bench, comprised of Justices Dinesh Maheshwari and Hrishikesh Roy while referring the view in Secretary, ONGC Ltd. v. V.U. Warrier - (2005) 5 SCC 245 held that “If an employee occupies a quarter beyond the specified period, the penal rent would be the natural consequence and such penal rent can be adjusted against the dues payable, including gratuity,"

A Division Bench had in 2017 ruled unfavourably against confiscating the gratuity of an employee on account of overstaying in official quarters after his retirement. The Bench had ordered immediate release of his gratuity and held only normal and not penal rent should be charged for the period overstayed. The Bench headed by Justice Kaul, however, held that any reliance on the case of Ram Naresh Singh v. Bokaro Steel Plant [Civil Appeal No.4740/2007]is misplaced since it is not even a judgment, but just an order on the given facts of that case. The said order cannot be treated as a precedent. The order by the Jharkhand high court snubbed an attempt by the Steel Authority of India Ltd (SAIL) to recover penal rent amounting to 1.95 lakh from an employee, who did not clear his dues and overstayed in the official accommodation in Bokaro after his retirement in 2016. The high court relied upon the Ram Naresh Singh v. Bokaro Steel Plant [Civil Appeal No.4740/2007], and said that the SAIL must release the employee’s gratuity immediately. However, it allowed the SAIL to raise a demand for normal rent. The Supreme Court has now set aside the part of the high court order that held that the SAIL could not recover the dues from the gratuity amount.  However, Supreme Court dismissed the writ petition observing that the amount in question is also quite small and thus, we feel it is not a fit case for interference under Article 136 of the Constitution of India.   [READ ORDER]