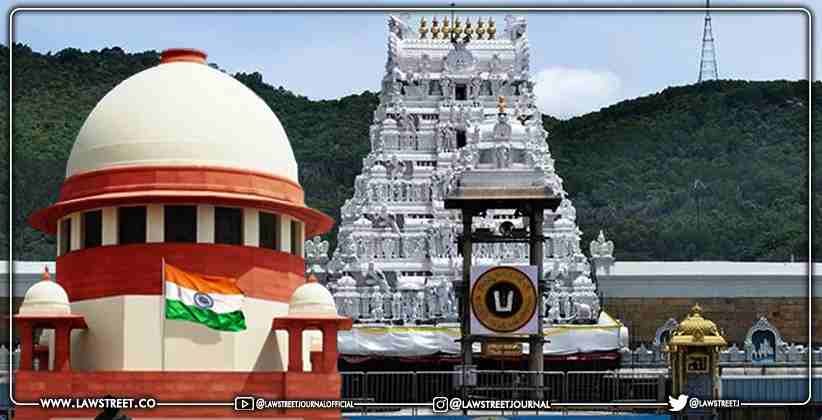 The Supreme Court asked the Tirupathi Tirumala Devasthanam on Wednesday (September 29, 2021), to respond to a grievance filed by a devotee of Lord Venkateshwara Swamy alleging irregularities in the conduct of 'sevas' and rituals at the Tirupati Temple, and to clarify the matter before the court.

A Bench comprising Chief Justice of India NV Ramana, Justice Surya Kant, and Justice Hima Kohli was hearing a Special Leave Petition filed by the petitioner challenging the order of the Andhra Pradesh High Court dismissing a PIL filed by the petitioner seeking directions to Tirumala Tirupathi Devasthanam to rectify the method of performing rituals and seva to Lord Sri Venkateshwara Swamy at the Temple.

During the hearing, the Bench indicated that the Court may not be able to intervene in the manner or number of people who conduct a pooja.

However, after learning that the petitioner had filed a representation before the Devasthanam, the Bench inquired about it and directed the Counsel appearing for Tirumala Devasthanam to investigate and report back to the Court.

While acknowledging that it may not be a matter of legal right, CJI Ramana also stated that he, along with his brother and sister Judges, are all devotees of Balaji and expect all rituals to be performed in accordance with tradition.

"We are all devotees of Balaji and expect all rituals to be performed in accordance with tradition," the CJI told the petitioner.

The Bench also told the petitioner in person, Srivari Daadaa, that as a devotee of Balaji, he should be patient and not threaten the Registry with listing the matter. Interestingly, CJI Ramana interacted with the petitioner (appearing in person) in Telugu for a short period of time.

According to the petitioner, the Devasthanam is performing sevas such as Abhishekam Seva, Thomala Seva, Arjitha Brahmostavam, Yekanta Utsavalu (Srivari Varshika Brahmotsavams – 2020) and Maha Laghu Darshan in an improper and irregular manner, and the method of holding the rituals should be corrected.

The High Court, in its impugned order, held that the PIL was not maintainable because the procedure for conducting rituals is the exclusive domain of the Devasthanam and cannot be adjudicated unless it affects the secular or civil rights of others.

Furthermore, the High Court ruled that the Devasthanam cannot be said to be performing public duties by performing rituals. Such ecclesiastical activities are not subject to writ jurisdiction at the request of an outsider.