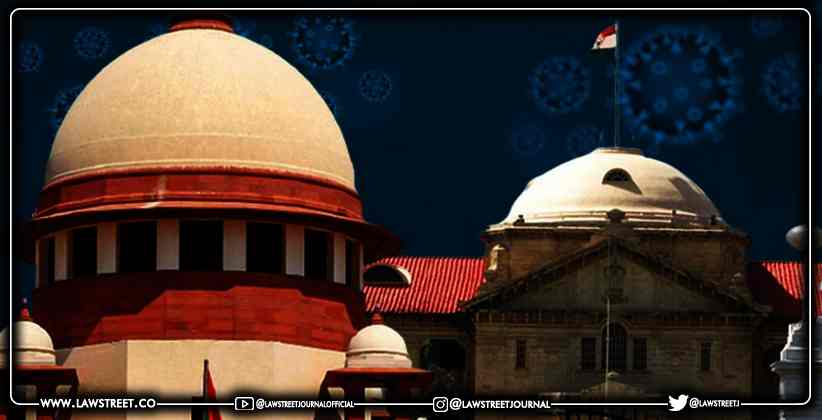 On Tuesday, May 25th 2021, the Apex Court stayed the Allahabad High Court order which stated that apprehension of death on account of the pandemic is a valid ground for grant of anticipatory bail.

The court ordered that the Allahabad High Court order should not be cited as a precedent for grant of anticipatory bail and that the courts shall not rely on the observations in the High Court judgement while considering pre-arrest bail applications. The bench appointed Senior Advocate V Giri as an amicus Curie to assist the court on the larger issue of whether covid can be a ground for granting anticipatory bail.

The order was stayed by a vacation bench chaired by Justices Vineet Saran and BR Gavai stayed the order after hearing the submissions of Solicitor General Tushar Mehta who appeared for the state of Uttar Pradesh.

The Solicitor General said that “Kindly see the bio data of the accused. The entire judgement proceeds on the basis that covid is a ground to grant anticipatory bail.”

The solicitor general continued saying that the applicant is a serial criminal with more than 130 criminal cases against him.

The Solicitor General emphasized staying the order of the High Court. The solicitor general continued that the High Court observations are being widely cited to seek anticipatory bail in other cases also.

The court commented that “if he is on bail in 130 cases, why not in the 131st case?” And also commented that the applicant must be on bail to seek pre-arrest bail in the present case. It was also emphasised again that the High Court’s sweeping observations should be stayed.

“Issue notice returnable in the first week of July. In case the respondent does not appear on the next date, we will consider cancellation of the anticipatory bail as well as stay off the order. It is being pointed out that the larger issues are involved in the case as sweeping directions have been given by the High Court regarding the grant of bail in covid circumstances.

The bench observed that “The directions concerned, remains stayed. The court may not consider the observations while considering bails and they shall consider the case on facts and circumstances”

To this, the bench also added, “we will appoint Shri V. Giri as amicus. Documents to be supplied to him within three days.”

The state of Uttar Pradesh moved to the apex code and challenged the order of Allahabad High Court where anticipatory bail was granted on the ground of apprehension of death on account of the pandemic.

On May 10th 2021, Monday, the Allahabad High Court observed that apprehension of death on account of the present pandemic is a valid ground for grant of anticipatory bail.

The order was passed by justice Siddharth.

The single bench stated that the inadequate medical facilities in the state may leave the accused persons unprotected from the threat to life on account of arrest as per the normal procedure applicable in normal times. It was observed that in extraordinary times extraordinary remedies and laws should be interpreted.

Further, Justice Siddharth noted that the established parameters for grant of anticipatory bail like the nature and gravity of the accusation, the criminal antecedent of the applicant, the possibility of fleeing from justice and whether accusation has been made for injuring and humiliating the applicant by getting him arrested have now lost significance on account of the present situation of the country and the state on account of spread of the deadly coronavirus.

In the court's point of view, if the accused is arrested and subjected to the consequent procedures of detention and locked up, production before the magistrate, grant or rejection of bail or incarceration in jail, the apprehension to his life will certainly arise.

The bench observed that, procedures provided under the CrPc or any special act, an accused will definitely come in contact with number of persons. He will be arrested by police, confined in lock up, produced before the magistrate and if his bail application is not granted promptly, then he will be sent to jail for an indefinite period till his bail is granted by the higher court.

The accused might be infected from the deadly virus, or police personnel who have lifted him, kept him in lockup, produced him before the magistrate and then took him to jail may also be infected persons. Even in jail, many inmates are found infected. There is a lack of proper testing treatment and care of persons confined in jail.

It is pressed that it is only when he would be alive, he would be subjected to the normal procedure of law of arrest, bail and trial.

If any accused dies on account of reasons beyond his control when he could have been protected from death by the court the grant or refusal of anticipatory bail to him would be an exercise in futility.

'Ensure that buildings of Rajasthan Bar Council Shall be made Operational as Covid Care Centre at the Earliest For Advocates, Family Members': Rajasthan HC to the State Government