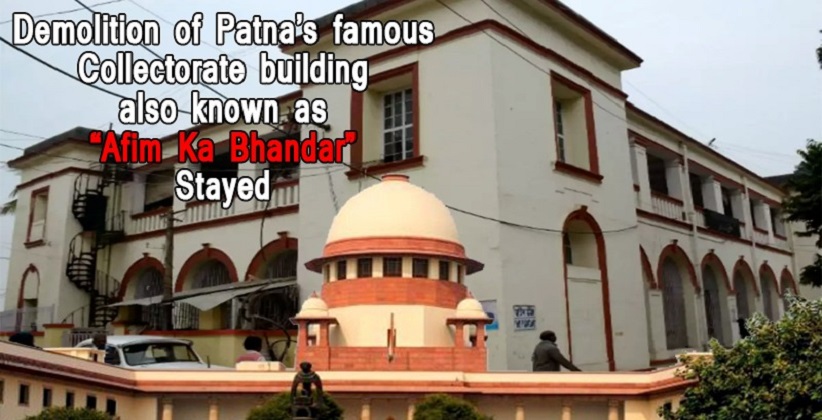 The apex court stayed the demolition of Patna’s famous Collectorate building also known as “Afim Ka Bhandar”. The bench headed by Chief Justice of India S.A.Bobde issued notice and directed the Bihar government to maintain the status quo regarding the aforesaid building till the plea against its demolition is decided by the apex court. The petition was filed on the Supreme Court challenging the Bihar HC judgment, delivered on September 1st, 2020. The HC judgment gave to the government for demolishing the building. The building is over 200 years old and was built by Dutch traders for the purpose of storing opium and Shora (Saltpeter). Post-independence the building was maintained by the district administration for government offices and this fact is crystal clear from the report dated May 3rd, 2016, which was made by experts and was headed by the Director of Archeology, Bihar.

The Government of Bihar took a step of building Patna as the ‘Smart City’ and for this particular building, the plan was to demolish it and to build it as a complex, a one-stop place, bringing efficiency in the administration. The plan is to spend One Hundred and Forty Crore and to make it a Modern Collectorate building having all the modern facilities and amenities.

The first issue was about the illegality pointed out for the constitution of the committee being contrary to Section 77 of the Development Act. Relying upon the case of Mukund Dewangan v Oriental Insurance Company Limited (2017) 14 SCC 663, BalasinorNagrik Cooperative Bank Ltd v Babubhai Shankerlal Pandya and Ors (1987) 1 SCC 606, State of Bihar v Hiralal Kejriwal AIR 1960 SC 47, Maqbool Vs. State of Uttar Pradesh and another, Mukund Dewangan Vs. Oriental Insurance Patna Company Limited, the Patna HC said that “The language of the Statute is simple, clear and unambiguous. The State Government has to constitute a Commission by issuing a notification. The Commission must consist of a Chairperson and such other members, representing among others, Urban Planning, Visual Art, Architecture, Indian History, Art, Archaeology, Tourism, and the Environmental Sciences. The expression “among others” would take in its sweep persons conversant with the specified areas and subjects. In our considered view, the Government has accounted for all such factors while constituting and notifying the Commission. Persons handling the affairs of Art, Culture, Youth, Tourism, Archeology have been called upon to discharge their statutory functions. The Constitution of the Commission is as per the statutory provision. Hence, we do not find any reason to interfere with this issue”.

On the second issue, relying upon the case of K. Guruprasad Rao Vs. State of Karnataka and others, Sarika Vs. Administrator, Shri Mahakaleshwar Mandir Committee, Ujjain (Madhya Pradesh) and others, etc. the HC said that the action of the Government cannot be said to be perverse, arbitrary, illegal, or whimsical.

The HC further said “Yes, in history there may have been some significance attached to this complex, but that is for the use of storage of Opium and Saltpeter for commercial purpose. But then there is nothing more than that. The building has no significance, whatsoever, with art, culture, or heritage or with that of any one of the movements of the struggle for freedom, leading to the independence of India. Equally, no celebrated person is associated with the same”. The HC also said to recreate the building and to preserve the pillars bricks and other valuables of the building thereby not using a bulldozer for the demolition.

The HC further added, “It is in these circumstances, we do not find any reason sufficient enough to accept any one of the prayers made by the petitioner” and the petition was disposed of by Patna High Court.