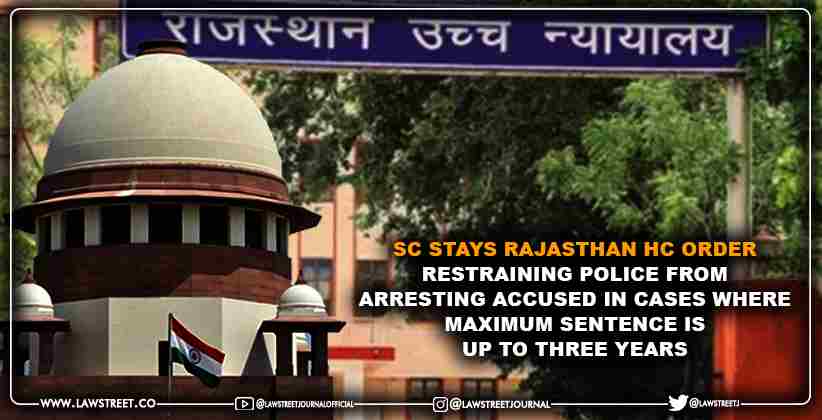 The Apex Court on May 25th 2021 Tuesday, stayed the Rajasthan High Court order restraining the police from making arrests of the accused persons who are charged with an offence where the maximum sentence is up to three years till 17th of July 2021.

The Apex court stayed the direction of the High Court single bench which directed the judicial registrar Jaipur Bench, Principal seat, Jodhpur, not to list bail applications under section 438 crpc in offences where the maximum sentence extends up to three years and the offence is triable by First Class Magistrate till reopening of courts after summer vacation.

A vacation bench chaired by Justices Vineet Saran and BR Gavai stayed the order on a special leave petition filed by the Rajasthan High Court against the single bench order.

The Bench was hearing a petition signed by the High Court challenging the May 17 order of single bench directing the DGP to issue instructions to all officers concerned in the state of Rajasthan not to make arrest of person in cases where accused is charged under an offence where maximum sentence extends up to three years and the offence is triable by First Class Magistrate. The order was remaining in operation till 17th July 2021.

Vijay Hansaria, Senior Advocate who appeared for the High Court of Rajasthan, told the Apex Court Bench that the single bench directions were problematic. The senior lawyer informed the range that last year also, the same single bench had issued an order to not list bail applications during the lock down period, and that the said order was stayed by the Supreme Court on an appeal filed by the Rajasthan High Court.

Senior advocate Manish Sanghvi, appeared for the Rajasthan state showed his support to the submissions of the High Court.

Following that Apex Court issued a notice on the petition, and ordered that the directions in paragraph 9, 10 and 11 of the Rajasthan High Court will remain stayed.

Matter before the High Court

A single bench presided by Justice Pankaj Bhandari of the Rajasthan High Court was hearing an anticipatory bail application filed under section 457 and 354 of IPC read with section 67 of the IT Act, wherein the maximum sentence which may be awarded after conviction may extend to three years.

Apprehending arrest, the petitioner moved an application before the Sessions Judge and on dismissal of the same, he approached the High Court.

It was noted by the court that “there is a huge pendency of bail applications and so as on date, as many as five judges at Jaipur Bench of Rajasthan High Court are hearing bail matters in addition to Miscellaneous Petitions, Criminal Appeals etc. which are resigned to them.

Further, the court noted that it was alive of the fact that in cognizable and non-cognizable offences, police has a right to arrest the accused, however, taking note of the grave condition of the pandemic, lockdown and various guidelines issued by the State, the court asked the Additional Advocate General, “whether the police which is involved in other more important tasks enforcing the locked down, be directed not to arrest an accused charged with an offence punishable with a term which may extend up to three years till situation normalizes and for the time being till 17th July 2021.

The Additional Advocate General replied in positive to this.

In the court’s opinion, the arrest of persons in cases where imprisonment extends up to three years and are triable under the first class magistrate under present circumstances will prove to be counterproductive and if a person who is arrested and produced before the magistrate and thereafter sent to jail, can be a carrier of covid synonyms and the inmates may be put at risk.