"No one is stopping you from going to office. Needless to say, lawyers' offices are expemted" : SC to Delhi Bar Association in petition seeking interstate movement 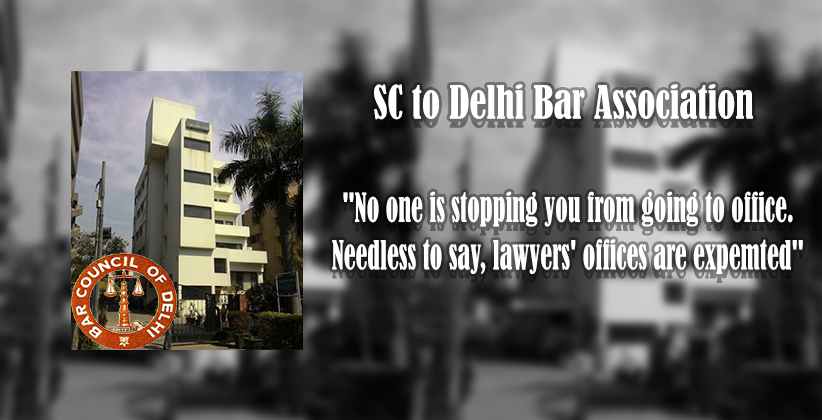 The Delhi Bar Council filed an appeal before the High Court of Delhi seeking the court’s decision on permitting lawyers to move in and out of Delhi to present before courts and their respective offices, in line with allowing interstate movement of lawyers.

The petitioner, Bar Council of Delhi’s Chairman, KC Mittal, endeavored to challenge the judgments of the State of Haryana and the State of Uttar Pradesh to seal the borders they possess with National Capital Territory of Delhi (NCT) which had rendered it almost impossible for lawyers living in National Capital Region (NCR) to travel to the courts as well as their places of work situated in Delhi.

Also Read - Delhi imposes Strict restrictions. Know what is allowed and what is not

It was brought to notice that the latest Ministry of Home Affairs guidelines, which were released on 8th May 2020, allowed private offices to work with a limited number of employees and staff. The petition also stated that the Government of Delhi, on 8th May 2020 made a statement clarifying that advocates and chartered accountants will not be thwarted from going to and working from their offices.

The petitioner argued that if people living in Delhi can go and attend their offices, then why the lawyers residing in the NCR region should be stopped from doing the same.

"When residents of Delhi are permitted to access their offices, why should lawyers living in the NCR region be deprived of the same. The non-permitting of advocates to cross the border by the officials and authorities at the border of respondents no. 2 (UP government) and 3 (Haryana government) are in violation of fundamental rights under Article 19 (1)(d) (right to freedom of movement) and 301 (freedom of trade and commerce) of the Constitution and their action is highly arbitrary and illegal."

It was also argued in furtherance to the earlier arguments that lawyers living in various parts of UP and Haryana cannot be disallowed from moving in and out of Delhi to work from their offices and perform their official duties.

In furtherance to the arguments put forth, the petition sought an order to be issued to the respondents to permit the movement of Lawyers, in and out of Delhi on presenting their Bar Council identity cards.

The said petition was filed by Advocate Amit Prakash Sahni.

In the said petition seeking inter-state movement of lawyers during lockdown measures, the Supreme Court of India stated: “No one is stopping you from going to office. Needless to say, lawyers’ offices are exempted” (Source: Twitter)

Delhi imposes Strict restrictions. Know what is allowed and what is not 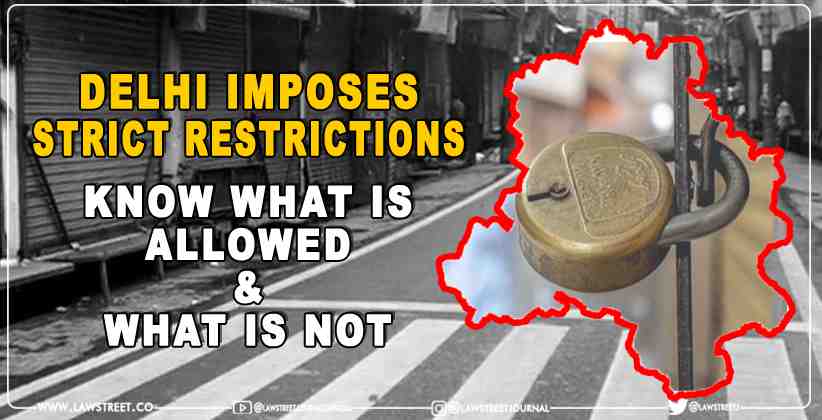 Executive Jan 12, 2022 Lawstreet News Network ( Editor: Vishal Bhutani ) 19 Shares
19 Shares
Delhi Disaster Management Authority has decided to impose strict instructions to contain Covid -19. In its meeting of 10th January headed by the Lt. Governor of Delhi, Anil Baijal observed that the covid positivity rate had jumped over 23% during the past few weeks. The DDMA through under section 22 of the Disaster Management Act. 2005, restricted certain activities in Delhi. These are as follows. 1) (i) All Private Offices shall be closed, except those which are falling under the...
Read full post