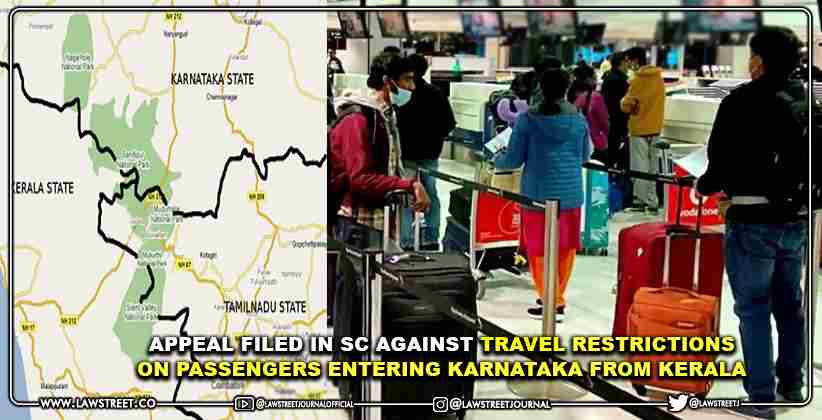 An appeal has been preferred before the Supreme Court against a Kerala High Court verdict which dismissed a plea challenging the travel restrictions imposed on those travelling to Karnataka from Kerala (AKM Ashraf vs Union of India).

According to Karnataka's most recent regulation, dated July 31, 2021, all passengers entering Karnataka from Kerala must have a negative RT-PCR certificate obtained within 72 hours of travel, regardless of whether they are fully vaccinated against COVID-19.

The Deputy Commissioner of Dakshina Kannada District also issued an order on July 31, 2021, ordering the closure of the Kerala-Karnataka border and the cancellation of government transport buses seeking to cross the border.

"Even people who have received two doses of the COVID-19 vaccine must take the (RT-PCR) test. In its order, the Respondent directed the deputy commissioners of the Dakshina Kannada districts that border Kerala to make the necessary arrangements and deploy personnel at check points to ensure that all vehicles entering the state follow the rules, "Advocate Haris Beeran's plea highlighted.

According to the appeal filed through advocate RS Jena, the regulation affects students and the general public who visit the state on a daily basis for education, business, jobs, medical treatment, and other reasons, and "makes no sense for daily commuters."

Furthermore, the petition emphasized how the people of Manjeshwaram constituency in Kerala rely on Dakshin Kannada Districts/ Mangalore city in Karnataka for their basic needs.

"The people residing in the bordering areas are primarily aggrieved by the respondent State's arbitrary decision because the Dakshin Kannada districts are only 10 to 20 kilometres away," the plea stated.

In addition, the plea contended that the Karnataka government's directives are in conflict with the directive issued by the Government of India on August 25, 2021.

According to the Central Government, no RT-PCR test should be required for fully vaccinated people to cross from one state to another.

According to the submission, the said direction was issued in the exercise of powers under the Disaster Management Act and will take precedence over state directives.

The petitions were dismissed by the Kerala High Court, which cited territorial jurisdiction issues while pointing out that the High Court of Karnataka had issued conflicting directions on a similar matter.

"We have no hesitation in holding that the petitioners have failed to establish this Court's territorial jurisdiction in interfering with the circulars issued by the State of Karnataka," the High Court said.

According to the appeal before the Supreme Court, the dismissal of the writ on the basis of lack of jurisdiction was improper because, under Article 226, the High Court has the power to issue Writ to any government in relation to the territories within which the cause of action arises wholly or in part, even if the seat of such government or authorities is not within its territories.