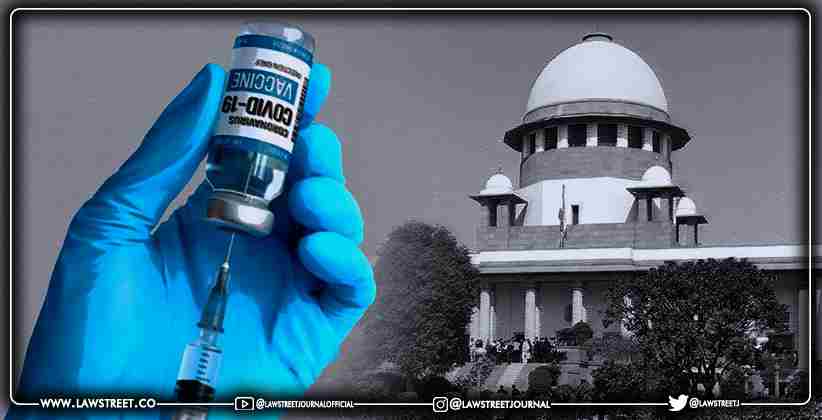 A bench of the apex court comprising Justices DY Chandrachud, L Nageshwar Rao and Ravindra Bhatt questioned the Central Government on the discrepancy in the policies of procurement of COVID-19 vaccine between states and the Centre.

The bench initiated the hearing of Suo moto proceeding on issues relating to supply of oxygen, drug and vaccine policy in relation to the COVID pandemic.

The Court said that "Centre says it gets vaccines at low pricing since it buys in bulk, if this is the rationale then why do states have the higher price? There needs to be one price for the vaccines across the nation. Pandemic has evolved in last two months.

"In this case, if the purpose is to procure vaccines then why should the centre confine itself to only post 45 age people & leave pre 45 age entirely to state for arranging logistics. How do we look at the marginalised & economically weaker ones?," it further added.

The bench also questioned the Solicitor General appearing for the Centre about the registration for vaccine for all above 18 years of age and what would happen if a villager doesn’t carry a mobile? The SC also asked the Centre about its plan to address the digital divide and ensuring vaccines to the migrant workers.

Solicitor General, Tushar Mehta told the bench that ‘if a farmer doesn’t have a mobile then he can go to a centre and get registered and Regarding providing modes other than digital divide, CoWIN allows for the registration of up to four people and the panchayats have centres and infrastructures fir internet, as for those who still do not have access can take help from friends and relatives.’ He added that online registration was necessary in the light of the exhaustible number of vaccines and to avoid crowing due to walk-in.

Justice Bhat further mentioned that he has been getting destress calls that as soon as the slots are announced, they get booked within two minutes.  Adding to this, Justice Rao said that 75percent vaccination is in urban areas and the concern needs to be addressed.

The bench called for amendment in the policy and formulation of new policies that would address the new issues in order to better guide the states.

Justice Chandrachud said, "If we agree to something wrong, then it is not a sign of weakness but strength. The purpose of the hearing has been dialogical, we are not going to lay down policy & engage stakeholders in dialogue. We want to make sure that the arms of the nation are strengthened. The fact that the Minister of External Affairs travelled to the USA & spoke to stakeholders shows how serious you are."

During the course of the hearing, Justice Chandrachud also addressed the news of disposal of dead bodies in the rivers and remarked, “I don't know whether a complaint of sedition has been filed against the news channel for publishing the photograph."