Show Cause Notice Must Clearly Mention Intention to Blacklist the Notice: Supreme Court 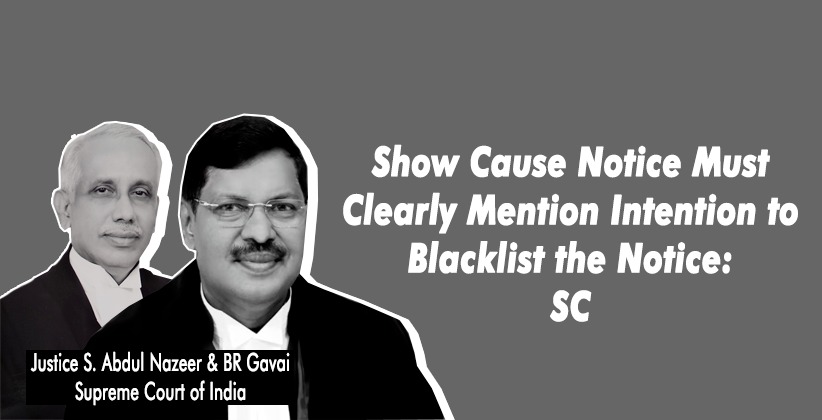 Food Corporation of India had issued an order to blacklist UMC Technologies Pvt. Ltd.  from participating in any future tenders of the Corporation for a period of 5 years. The Apex Court was approached against the order of the High Court which dismissed the challenge against this blacklisting order. The contention raised was that the action of blacklisting could not have been taken without specifically contemplating such action in the show cause notice.

The Supreme Court while setting aside a blacklisting order issued against UMC Technologies Pvt. Ltd. observed that A show-cause notice, to constitute the valid basis of a blacklisting order, must spell clearly, or its contents are such that it can be clearly inferred therefrom, that there is an intention on the part of the issuer of the notice to blacklisting the notice.

A bench of Justice S. Abdul Nazeer and BR Gavai observed that a clear notice is essential for ensuring that the person, against whom the penalty of blacklisting is intended to be imposed, has an adequate, informed, and meaningful opportunity to show cause against his possible blacklisting. The court further said that the action of blacklisting was neither expressly proposed nor could it have been inferred from the language employed by the corporation in its show-cause notice.

The Court observed that “The Corporation’s notice is completely silent about blacklisting and as such, it could not have led the appellant to infer that such an action could be taken by the Corporation in pursuance of this notice……In our view, the order of blacklisting the appellant clearly traversed beyond the bounds of the show cause notice which is impermissible in law”.

The Court also observed that Blacklisting has the effect of denying a person or an entity the privileged opportunity of entering into government contracts and hence there should be adherence to principles of natural justice whenever an entity is sought be blacklisted.