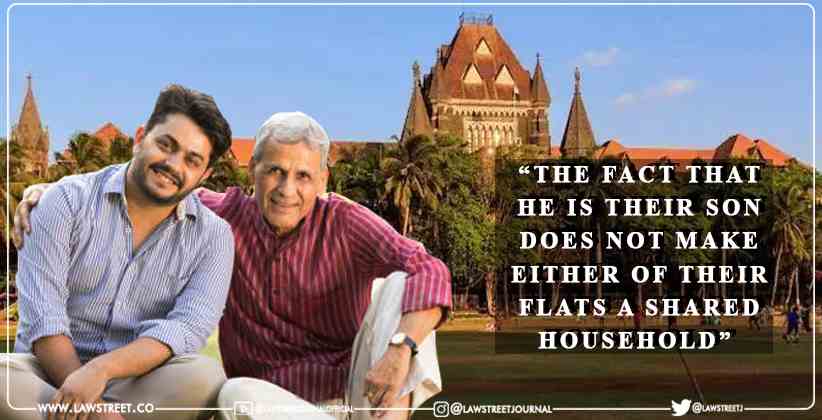 The Bombay High Court has observed in a recent case that a son doesn't have any right, title or settled and enforceable share in his parent's flats till they are alive.

The Bench in doing so rejected the son's intervention application, in the present case, in his mother's petition to be appointed as her husband's guardian for him and property.

The Bench comprising of Justices Gautam Patel and Madhav Jamdar rejected the son's suggestion that he has a settled and enforceable share in either of the flats in the lifetime of the real owners, his parents.

The Bench opined that the suggestion of the son to assume such a right during the lifetime of his parents was hilarious.

The subjected property was a bank account with 'Saraswat Bank,' and the father's flat in Marol, Andheri. The son, living elsewhere, sought to intervene and oppose his mother's plea claiming to be the father's "de-facto" guardian for many years.

“He has no rights in his father's flats and he has nothing to show that he has ever cared for his father” the Bench observed adding that the mother and married sister had furnished number of documents  to show the mother had been bearing the father's medical expenses.

"The fact that he is their son does not make either of their flats 'a shared household", the Bench said.

The son further claimed that although his parents were alive, the two flats owned by his parents were "a shared household" and therefore he, the son, has some sort of enforceable legal right or entitlement to either or both of these flats.

The court found the son's submission "ill founded," and "illogical" and "laughable."

"In any conceptualization of succession law for any community or faith, Asif can have no right, title or interest whatsoever in either of these flats — one in his father's name and other in his mother's name — so long as his parents are alive."

"Asif(Son) can have no right, title or interest whatsoever in either of these flats — one in his father's name and other in his mother's name — so long as his parents are alive. The suggestion that Asif has a settled and enforceable share in either of the flats in the lifetimes of the real owners, his parents, is laughable. The fact that he is their son does not make either of their flats 'a shared household.”

The Court said that there is no provision of Law to Deal with Pro-Tem Guardianship and while allowing the mother to operate her and her husband's joint account, the court directed her to keep an account of all the expenses and not use the money for herself.

Other directions included that she would be permitted to negotiate with flat purchasers but not sell the house without the court's permission. The bench said that these safeguards were required as there were no "structured provision in law as yet to deal with these situations."

"We put the case of Fazal Khan (father) practically on the same footing as that of a minor who holds a share in an immovable property. This necessarily means that Fazal's interests are under the care and supervision of the Court…it is for this reason that we find ourselves unable to grant an open-ended permission in cases like this," the bench said.

Bharat Biotech and Serum Institute of India oppose revelation of Vaccine Trail Data. ‘It is where it should be’- Counsel for Bharat Biotech