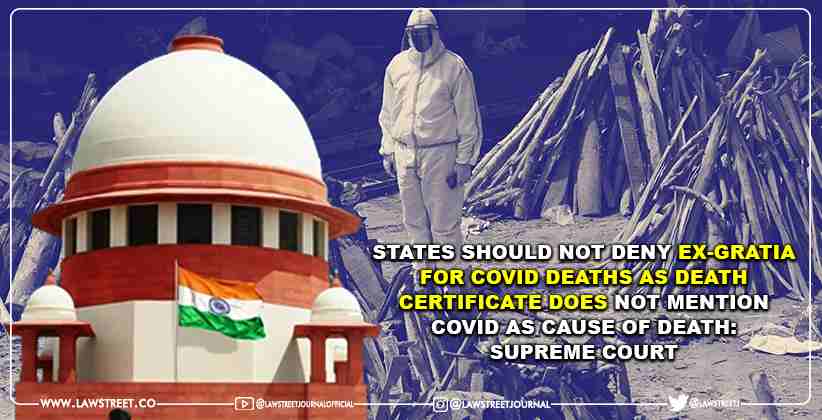 On 4th October 2021, the Supreme Court stated that the compensation of 50,000 as ex-gratia should be provided by the state to the kins of the deceased who have died of COVID, even if the death certificate of the person does not mention COVID as the cause of death.

The Public Interest Litigations  filed by Reepak Kansal and Gaurav Kumar Bansal was the action responsible for the order of the Supreme Court to the National Disaster Management Authority(NDMA) to frame certain guidelines for granting compensation to the patients who had died due to COVID.

Furthermore, Gaurav Kumar Bansal appealed in the apex Court for the implementation of the directions given to the NDMA, as a result of which guidelines were framed stating that the kins of the deceased were supposed to receive a compensation of INR 50,000 which is to be paid by the States from the State Disaster Response Funds.

Also Read - No Provision For Re-Examination Of Civil Service Aspirants Failing To Appear In Mains Due To COVID: UPSC Tells Supreme Court

In order to resolve the anomalies of the Death Certificate, it was held that the Grievance Redressal Committees at district and state levels would be responsible for dealing with such problems.

The Bench of Supreme Court consisting of Justices MR Shah and AS Bopanna held that the guidelines issued by the National Disaster Management Authority should be followed  for granting compensation in such cases.

The Bench further held that if a deceased dies due to COVID and the death certificate has been issued without COVID as a reason of death then they can move the appropriate authority in case the state denies providing them with compensation.

The Court stated that if the appellant fails to find relief then he can approach the Grievance Redressal Committee.

AMOUNT PAID BY THE STATE AND CENTRE

The Court held that under various benevolent schemes the deceased shall be paid an amount of INR 50,000 which would be over and above the amounts paid by the state and centre.

The Court, in order to spread awareness about the Ex-gratia has ordered for the publication in media  regarding the details of the district level authorities and grievance redressal committee in media.