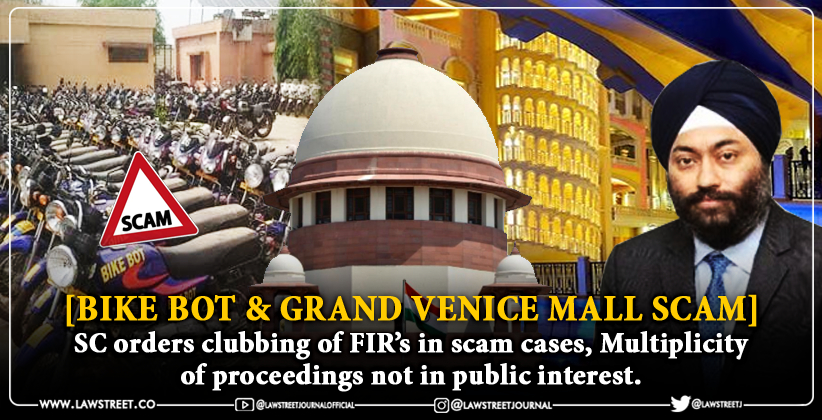 Observing that multiplicity of proceedings was not in "larger public interest", the Supreme Court has exercised its special power and allowed consolidation of multiple FIRs, the consequential trial to one court in Greater Noida in relation to the multi-crore rupees alleged 'Bike Bot' and "Grand Venice Mall" scams.

“We, in the exercise of power under Article 142 of the Constitution of India, accede to the relief claimed in terms of the prayer clause (b) — of consolidation of all FIRs, including those registered in New Delhi with FIR no 353/2015 as the principal FIR and for being proceeded in accordance with law, as we are of the opinion that multiplicity of the proceedings will not be in the larger public interest as well.”

Over 100 FIRs were registered against several persons in Uttar Pradesh and one FIR in Delhi in connection with the Bike Bot scheme scam.

According to reports, over two lakh people have allegedly been cheated of about Rs. 15,000 crore on false promise of lucrative returns on investments in a bike taxi service scheme and around 46 FIRs have been registered against several persons in connection with the alleged Grand Venice Mall scam in which investors claimed that they were duped by the accused in handing over the plot of land.

A bench comprising Justices A M Khanwilkar, Abhay S. Oka and Justice J B Pardiwala was dealing with a batch of petitions of the accused seeking various reliefs such as grant of bail, protection against coercive action including the relief of consolidation of FIRs and trial at one place where the alleged offences were committed.

"Although, diverse reliefs have been claimed in these writ petitions, the learned counsel appearing for the parties have broadly agreed that they would confine the relief of clubbing of multiple FIRs in respect of Bike Bot Scheme with the principal FIR bearing No... registered at Police Station Dadri, District Gautam Budh Nagar, Uttar Pradesh," the order said.

"We are also of the opinion that multiplicity of proceedings will not be in the larger public interest as well," the bench noted in its order while ordering clubbing of the FIR.

The Bench relied upon the judgement of the Supreme Court passed in the case of TV journalist Amish Devgan and exercised its wide power under Article 142 of the Constitution while ordering clubbing of multiple FIRs in both the scam cases.

Article 142 provides discretionary powers to the Supreme Court as it states that the Supreme Court in the exercise of its jurisdiction may pass such decree or make such order as is necessary for doing complete justice in any cause or matter pending before it.

Advocate Vishal Gosain appearing for the petitioner, Satinder Singh Bhasin, argued that the FIRs related to the same accusations needed to be clubbed to avoid multiplicity of proceedings.

Under the 'Bike Bot' scheme, floated by a company known as Garvit Innovative Promoters Limited (GIPL), an investor had to pay Rs 62,100 per bike with an assurance of Rs 5,175 in monthly returns and other benefits. The rent was fixed at Rs 4,590 per bike per month, the probe agency had said.

Investors could invest in as many bikes as they desired. It was a multi-level marketing scheme, it had said, adding that more than two lakh people were allegedly cheated of about Rs 15,000 crore on the false promise of lucrative returns on investments in a bike taxi service scheme.

The court further noted that,

"Investigation in respect of some FIRs has been completed and even chargesheet have been filed by the Special Investigation Team (SIT), constituted by the state of Uttar Pradesh in respect of all these cases. In terms of this order, the chargesheet(s) filed in other cases shall be merged with the chargesheet filed in a criminal case arising out of the FIR. Further, it will be open to the investigating officer in the case to file a supplementary chargesheet, which will be a composite chargesheet to deal with all the statements collated during the investigation in the other cases, including the statement of the complainant in the respective FIR. The supplementary chargesheet to be filed on the basis of the entire record so collected during the investigation in the respective cases will be then made the basis to proceed for trial against the petitioner and named accused therein."

Then bench also stated that,

“Furthermore, the trial shall proceed as per law from the stage of the filing of the supplementary charge sheet. In case, the Courts have already taken cognizance on the basis of the chargesheet(s) filed in respective cases, those cases in terms of this order shall stand transferred and merged with the trial of the case.”

The Court ordered the respondent-States to submit a report on their compliance with the aforementioned instructions by the next hearing date, which was set for July 21.

Lastly the Court held that:

“We make it clear that pendency of these matters will not come in the way of the High Court to consider the writ petition(s) filed before the High Court for the same relief of converting the land from lease hold to free hold, if the same reach for hearing before 21.07.2022.”