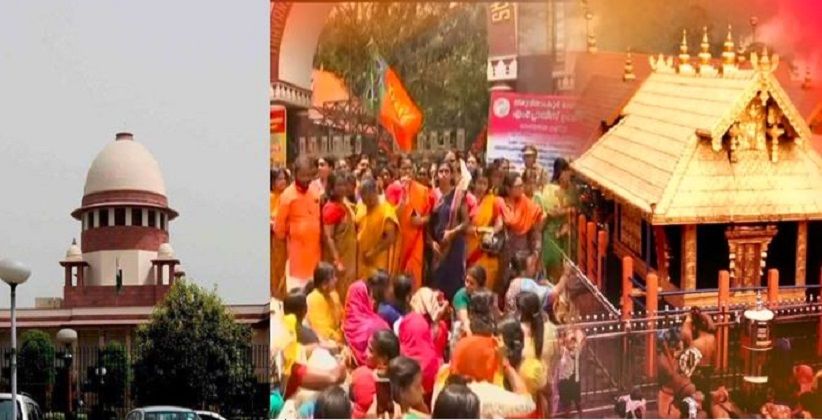 The Supreme Court on October 9, 2018, declined the urgent hearing of petitions seeking review of its ruling lifting age-old restrictions to allow entry of women, irrespective of their age, into the Sabarimala Ayyappa temple in Kerala.

A Bench headed by Chief Justice Ranjan Gogoi turned it down after advocate Mathews Nedumpara made a request for an urgent listing of review petitions.

The apex court also refused to stay the verdict.

After a Constitution Bench comprising of then Chief JusticeDipakMisra and JusticesRohinton Nariman, AM Khanwilkar, DY Chandrachud, and Indu Malhotra by 4:1 majority lifted the restriction on the entry of women into the temple, four petitions were filed seeking a review of the Supreme Court’s verdict that has evoked a series of protests by women devotees.

The five-judge Constitution Bench declared the practice as unconstitutional. Justice Indu Malhotra, the lone woman on the Bench had dissented.

The review petitioners, including Nair Service Society and People for Dharma, said the apex court wrongly concluded that exclusion of women between the age of 10 and 50 was discriminatory.

“A clear perusal of the opinions rendered as part of the majority view shows that apart from patent legal errors, the factually erroneous assumption that the practice of the temple is based on notions of menstrual impurity has materially contributed to the majority view. This necessitates a review of the judgment,” read one of the petitions.

The petitioners submitted that to deny a religious denomination status to Sabarimala Temple and Lord Ayyappa’s devotees merely because they did not conform to Abrahamic notions of religious denominations, “is to defeat the very object of the absence of a definition and to abrahamise the core of the Hindu faith, which is unconstitutional”.

“In the present case, the subsequent events that transpired after the judgment of which judicial notice may be taken, clearly demonstrate that overwhelmingly large section of women worshippers are supporting the custom of prohibiting entry of females between the age of 10 and 50 at Sabarimala temple,” Nair Service Society said.

Further, contending that the verdict “sent shock waves among millions of Ayyappa devotees, Vijayan submitted, “The judgment under review is an interference with the faith and belief of millions of devotees of Lord Ayyappa, which the court is not empowered to do and certainly not without notice to them and without hearing them. The judgment dated September 28, 2018, is, therefore, one rendered void ab initio…”

Moreover, the petitioners also contended that the majority opinion erred in not considering the evidence placed on record which demonstrated that the practice was a direct consequence of the celibate form of Lord Ayyappa and the rules of Naishthika Brahmacharya which applied to the deity.

They said the court was not right in concluding that in all circumstances, the right of an individual must prevail over the rights of other individuals in a public place of worship.