Breaking: Supreme Court to examine Constitutionality of Declaration of 1975 Emergency After 45 Years 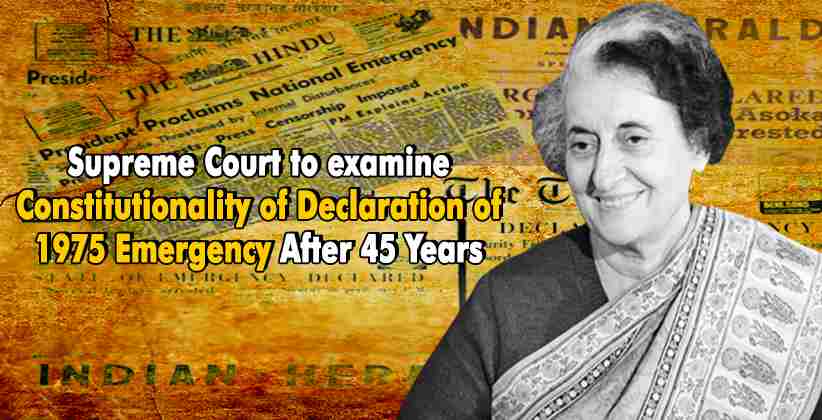 Judiciary Dec 15, 2020 Dev Kumar Patel ( Editor: Ekta Joshi ) 72 Shares
72 Shares
It has been more than 45 years after thousands of people were jailed across India under an Emergency imposed by the Indra Gandhi-Government on the grounds of ‘internal disturbance’. The Supreme Court on 14th December 2020 agreed to examine whether the said declaration of Emergency in 1975 was unconstitutional or not.

A three-judge bench of Justices Sanjay Kishan Kaul, Dinesh Maheshwari and Hrishikesh Roy issued a notice to the Center asking it to respond to the plea filed by Veena Sarin, a 94-year-old woman who urged to declare the proclamation of Emergency in 1975 as unconstitutional as well as sought compensation of Rs 25 crores, which the court refused to entertain. Senior Advocate Harish Salve appeared for petitioner who said “He felt very strongly about the issue.”

During the hearing, the bench raised questions about hearing the issue after the passage of 45 years. "This plea arises from the passage of time. It is Mr. Salve's submission that 'prayer A' survives and wrongs of history must be corrected. We asked Mr. Salve whether the petitioner is seeking other reliefs too. Salve informs wrongs on the petitioner is not the main issue. We would be disinclined to reopen such aspects. After 45 years it may not be appropriate to reopen those issues," the bench said. While allowing the petitioner's lawyer to amend the plea the bench said that "We would, however, be not disinclined to see whether probing such a proclamation after such a long time would be feasible or not. We issue notice on prayer A. Senior counsel may restructure the petition. Leave to amend the petition by December 18."  The petition filed by Veena Sarin, a 94-year-old widow, stated that her petition was “a genuine desire to bring about an end to the undemocratic nightmare infamously known as ‘the emergency’ and to seek a peaceful closure, that can be brought only by an acknowledgement and declaration by the highest court of Justice of the country in which citizens repose the highest level of the confidence and faith, that the said incident was unconstitutional.” She further added that the petition is filed for "restitution of a lifetime spent in utter misery and anguish on account of the atrocities" suffered by her, her deceased husband, and her family. In her plea she relied on the 2017 Judgment in K. S. Puttaswamy case which overrurled the infamous decision in ADM Jabalpur Vs. Shrikant Shukla(1976), the plea states in the lighter note that the burial of the darkest chapter in Indian democracy is yet to provide respite to the Petitioner who suffered atrocities at the hands of authorities during the Emergency period.  At the outset of the hearing, Harish Salve contended that he was relying on the JC Shah commission report (inquiry appointed by the Government of India in 1977 to inquire into all the excesses committed in the Indian Emergency) the proclamation was a Constitutional abuse of power. Justice Kaul hearing the case replied that "something has happened in the history... after 45 years to go into the issue..." Harish Salve argued, "perhaps it's the right time. After 45 years you have reversed a judgment too. Abuse of power in history needs correction. What relief you give is another matter. Once this country must know fundamental rights were put in jackboot." Further, it is added by Harish Salve that "There are certain things in history which we have to revisit and see if the correct thing was done, this is one such issue." He said that it was a gross abuse of power as people were detained for 19 months. "War crimes issues are still heard. Gender-sensitive matters are still heard. The rights of nascent democracy were abused for 19 months. History does not correct but repeats itself," Salve added. During the hearing, Justice Kaul asked can we really say powers invoked under the constitution is illegal? Responding to the query, Salve said that the act was a "fraud on the Constitution". "Such an advanced Constitutional court needs to be addressed. We must have this decided by this court. I feel very strongly about this. This is not a matter of political debate. Didn't we see what happened to prisoners during the emergency," he said. "Post world war, people are raising issues of holocaust now. For us, we say emergency and we are still there around ... The petitioner is not a political person. A petitioner is just a person who has been wronged," Salve said. "We know what happened then. Home to home identification took place. The court must pronounce an order and say that the proclamation of emergency was incorrect," he further argued. The plea said that the burial of the darkest chapter in Indian democracy is yet to provide respite to them, who it said suffered atrocities at the hands of the authorities during the emergency period. The prayer by petitioner was as follows: