SC Notifies Fresh Roster to Be Effective from October 5,2020 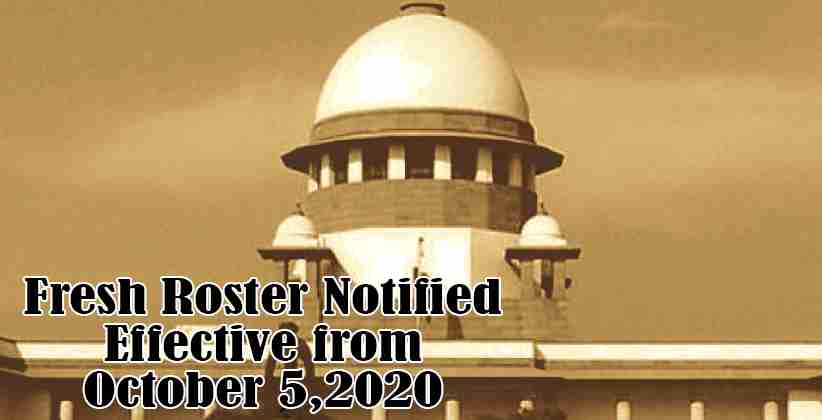 The Public Interest Litigation (PIL), letter petitions, and Social Justice matters will now be heard by the Chief Justice of India (CJI) and seven senior judges. As per the new roster Senior most judges like N V Ramana and Justices R F Nariman, U U Lalit, AM Khanwilkar, D Y Chandrachund, Ashok Bhusan, and L Nageswara Rao, PIL and Letter Petition are to be dealt by them.

Besides PIL matters, CJI Bobde has kept with him the matters of contempt of court, election, habeas corpus, social justice, direct and indirect tax cases, and election matters, among others. Religious and Charitable Endowment Matters are allotted to the benches headed by Justices N V Ramana, UU Lalit, D Y Chandrachud, and Ashok Bhushan.  Arbitration Matters to benches of CJI, Justice Ramana, R F Nariman, Indu Malhotra, and Indira Banerjee. At present, the roster notified with effect from July 1, 2019, is in prevalence. The subject-wise roster system was introduced by former CJI Dipak Misra in February 2018, in the backdrop of the 'master of roster' controversy which erupted after the press conference by four senior judges, who alleged that the CJI was selectively assigning cases to benches of preferences, ignoring seniority of judges.