Bench: We'll take this up towards the end.

SC says that prima facie it is of the view that probe against former Mumbai police commissioner Param Bir Singh should be probed by other agency and not by state police.

SC says that Maharashtra police can continue with its probe on FIR lodged against Param Bir Singh but no chaalan be filed in court in those cases.

CBI tells SC that it has no problem in taking over the probe of criminal cases filed against Param Bir Singh by Maharashtra police and contends that those cases should be transferred to the central agency.

Bali: Now as far as State of Maha is concerned, they have filed a reply and the DGP has also filed a reply but the reply of CBI is not on record

SG for CBI: We have nothing to contest.

Bench: You put forth your affidavit, what your stand is, please state your stand on affidavit.

Khambata for State of Maharashtra: We have filed our counter and the matter should not be investigated by the CBI.

Bench: What your allegations of his service etc, that is for you to take. but this is one of the very unfortunate message.

Bench: The only concern that we should have is, whether in regards to other matter whether the CBI should have consider the same or not.

Khambata: Several months he took charge as police commissioner and he was part of the board, When he felt that it was turning on him, he filed the letter and leaked it into media.

Khambata: He is not a whistle blower

Bench: In your wisdom, having appointed the office he can fall out of the same. We only have to consider whether we should entrust this task of the part to CBI.

Khambata: The current director of CBI was chairman of police establishment board too that decides that all these transfers. He would certainly be a witness.

Khambata: On the point of malafide..

Mr Khambata from your submissions that you have made we think that some other agency should consider the matter.

Bali: My lords passed interim order & I have filed every investigation in every FIR. There is a matter that relates to person related to extornist against whom I had taken action.

Bali: Then they suspend me. I must place how they have tried to scuttle the order passed by your lordship dated April 8.

When summons were issued by the CBI to Sanjay Pande but they have filed a writ. They do not want their officers to be summoned by CBI.

Bench: Mr Bali, on a side note you see how the common man suffers? I can see the signals that are going.

Bali: Mr Sanjay Pande has not even been empaneled. He could not be the DGP & they are not following the Prakash Singh judgement.

ASG Lekhi for CBI: The petition is pending & on the base of imagined state of affairs they want to shield the wrong doer.

ORDER
Dealings are complete as far as R1 & R3 are concerned. 1 week's time granted to CBI to file its reply on the conspectus of what has been stated in our order dated. Interim order to continue.

Bali: As far as my submissions are concerned, I want independent inquiry. Kindly look at the tearing hurry. Once cognisance has been taken by My Lords as to whether the FIR's should be transferred to CBI, is it fair that they file challans?

Bench: They will not file challans, but the investigation should go on. 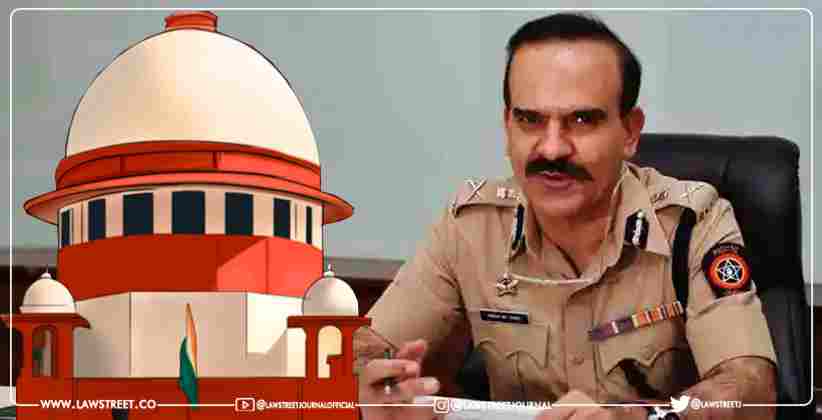 Judiciary Nov 22, 2021 Lawstreet News Network ( ) 11 Shares
11 Shares
Supreme Court grants protection from arrest to ex Mumbai top cop ParamBirSingh in six cases lodged against him for sensational charges of Rs 100 Cr extortion against then HM Anil Deshmukh.Supreme Court grants IPS officer Param Bir Singh protection from arrest after counsel informs Supreme Court that Singh is "very much in India"Param Bir Singh informs the Apex Court that he is very much in the country. Alleges threat to his life from the Mumbai police the moment he enters Maharashtra.Directs...
Read full post