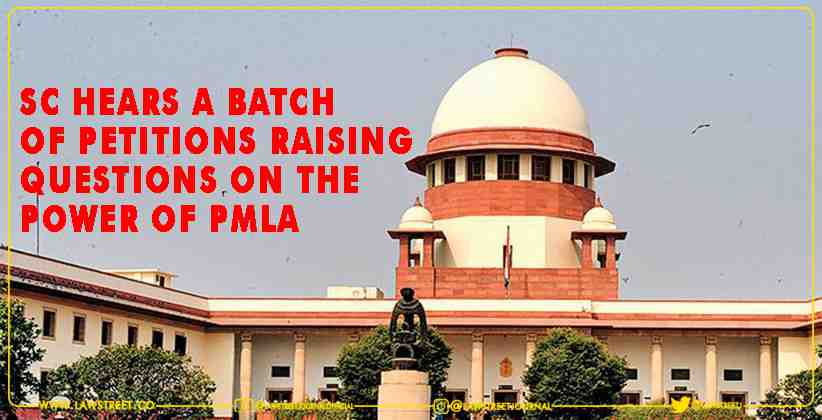 Sibal: This is not about activity of drugs or any such offence like the war on the nation.

SC: you will recall a case from Maharashtra.. where 6,000 crores were laundered. we don't have to take names

Sibal: Yes, that was a specific case..it was the Telgi scam..

Sibal: possession of counterfeit stamp is not akin to waging war..

SC: But the proceeds gathered with such an affair comes under PMLA

Sibal: then why does a murder offence comes under the PMLA unconnected with some act..

Justice Dinesh Maheswari: there can be cases of contract killing

Sibal: it's a gangster activity with prior intent...

Justice Maheshwari: then it becomes a organized crime syndicate... then 120B can play a role Sir

Sibal: it coming into the scenario is something depending on the authority...

Justice Maheshwari: that is fine.. on that we are hearing you...

Sibal: entries can be reformulated in a manner so that it covers the crime for which the act was intended. Then you have attempt to commit culpable homicide... that is PMLA.. how is voluntarily causing hurt for property be part of PMLA...

Sibal: offence is money laundering and not proceeds of crime

SC: Merely possessing such proceeds of crime.. doesn't it amount to money laundering?

Sibal: proceeds of crime is not an offence but it has to be from the tainted money...

Sibal: in all these case its discretion of officer and if its a big fish PMLA comes in the picture. That is why it is all up to discretion that is why genesis of the act becomes important.

Justice CT Ravikumar: what about an explanation to section 3?

Sibal: the explanation itself runs contrary to the main section..

Justice Maheshwari: yes... you have a point

Sibal: we have prepared a note on propositions. we will submit it

Sibal: this explanation was also included by an amendment to the Finance Act. Please look at Section 50 now of the PMLA. Section 13 speaks about reporting authorities which are banks... for finding out if money is being used as untainted money we can call banks

Sibal: section 50 deals with summoning people apart from section 13. word investigation is not used... and statements made by a summoned accused then it is admissible as evidence and treated as a judicial proceeding and i may be prosecuted. this is entirely unconstitutional

SC: We will continue tomorrow

Sibal: No No my lord.... please keep it after the break

Sibal: The moment predicate offence is committed an ECIR is registered

SC: At what stage should ED officer should take cognisance under PMLA is part of same argument?

Sibal: yes, My Lord.. but that information needs to be given to me.

Sibal: I should have the ability to defend myself. the right to defend myself is there and if not granted then its a violation of Article 21. the problem is there is no procedure for explanation under the act.

Sibal: even in the GST its the same problem and customs act it is different, suppose i am importing prohibited gold i am caught and i know why i am being prosecuted but none of this happens under PMLA. GST is the same thing.

SC: If the information in the knowledge of the officer is shared with you wont that be tampered with?

Sibal: it will be similarly a criminal breach of trust. when tainted is made into untainted.. it is in the mainstream and it cannot be changed anyway. They can attach bank acc

Sibal: under predicate offence, they register the ECIR and do not inform me.

SC bench discharges the board so that only the PMLA case will be heard till 4 pm today.

SC: FIR is by local police and ECIR is by ED officer

Sibal: Yes. The ED officer records my statement under Section 50 and it is admissible as evidence.

SC: That procedure may be doubtful?

Sibal: a lot of these poppy seeds and drugs is in Afghanistan and Mexico thus feeding into terrorism. That is why there was this global declaration and adopted by the UN assembly and a special resolution was passed to prevent this.

Sibal: This PMLA act was designed to deal with activities which are designed to use drug money for terror activities in other words the very predicate offence like growing of poppy seeds of earning money through drugs was the main motive of global comunity

Sibal: what did we do? we started applying this to ordinary crimes. For example cheating under Section 420 which has now become a part of PMLA. This is not in consonance with said objective of the act

SC: So you say it should as in PMLA should contain only NDPS Act and prevention of corruption act

Sibal: it was not designed for IPC offences all i can say .. moment PMLA comes in i don't get bail. your lordships can imagine what the consequences are.

Sibal: suppose there is a gangster cartel dealing with illicit stuff, then yes. But for other sections... an offence that is compoundable added with PMLA disentitles you for bail. I am not questioning the plenary powers of the parliament

Sibal: Almost off these amendments were moved in the Finance act. One of the issue that has to be seen is that it has nothing to do with the money bill. You have dissent by Justice Chnadrachud in the Aadhaar matter and this matter is before the 7 judge bench (money bill issue)

SC: attachment is only in correspondence to the proceeds of crime

Sibal: they attach all assets and they don't attach the value as they say even that is generated from proceeds of crime and in the meantime my business is finished.

Sibal: Please look at section 50 of the PMLA act which says every proceeding before officers shall be deemed to be a judicial proceeding.

Sibal: I don't know what my status is when i am summoned under Section 50 of PMLA. Under section 50 there is no procedure and they just summon me.

Sibal: they just summon me and they arrest me, This also needs to be tested on the touchstone of Article 14 and Article 21. then the issue is ED is located in Delhi and under CrPC police station in area of crime has jurisdiction of the crime. under PMLA there is no such procedure

Sibal: They say territorial areas are only for convenience..... they can call me from wherever they want. As an individual, some magistrate must have control over me. That cannot be left to the whims and fancy of PMLA authorities.

Sibal: it is interesting to note that there are provisions of the act which speak about search and seizure and these provisions are somewhat inconsistent with that what is laid down in CrPC. Now it is said that what is in PMLA act shall prevail

Sibal: by an amendment to Section 3 they have provided by law that this is deemed to be an continuing offence. the offense is money laundering and when money is laundered offence is over.

SC: We will have constitutional validity issues first and then matters of interpretation..

Sibal: our submission is if doctrine of severabiltiy is not used then the entire PMLA act needs to be struck down as unconstitutional

Sibal: How can u say I will start an investigation but not file FIR. Or not go to the magistrate under 155..Internal manual for pmla. Now Enforcement case info report..That's something that's kept by ed by themselves. They don't give anybody

Sibal: One matter in Delhi hc says not obliged to give this manual..ECIR is nothing but FIR but they don't call it so..Criminal statute and penal statue which does not have procedure..3rd - pmla is with proceeds of crime pursuant to an act of criminality

Sibal: The offense is by attempting to or by legitimising it as legitimate money..In other words if I indulge in an act of corruption and keep money at home not pmla..But min I launder it and show on IT it is pmla. So offence is not proceeds of crime but money laundering

Sibal: So question is: at what point does pmla come in..It's kind of destruction of evidence by changing the character of proceeds of crime..At what stage does officer take cognisance of that offence..The money is tainted..then you show it as untainted

Sibal: if proceeds of crime is tainted, the act of showing them as untained is money laundering... if i convert it to jewellery and show the same then i am not charged under PMLA. So under what aspects does ED comes into the picture..

Sibal: how do they register an ECIR without the evidence of showing how tainted was made into untainted money. That information must be given to me otherwise how will i apply for anticipatory bail...

SupremeCourt hears a batch of petitions raising questions on the power of PMLA regarding search, seizure etc and also challenges the constitutionality of several Prevention of Money laundering Act

Sibal: The court came to the conclusion that a chargesheet has to be filed.  Wrong test to apply. The exercise of powers of an official will not depend on the nature of the outcome... However, because pmla is a penal statue, we don't have to go in the question at all

Sibal: PMLA must presume as matter of law, that crpc is estd for purpose of life and liberty. CrPC prescribes two methods of investigation.Cognisable and non cognisable..Under PMLA no such procedure..Neither FIR neither 155. So how can you have a penal statue in absence of procedure