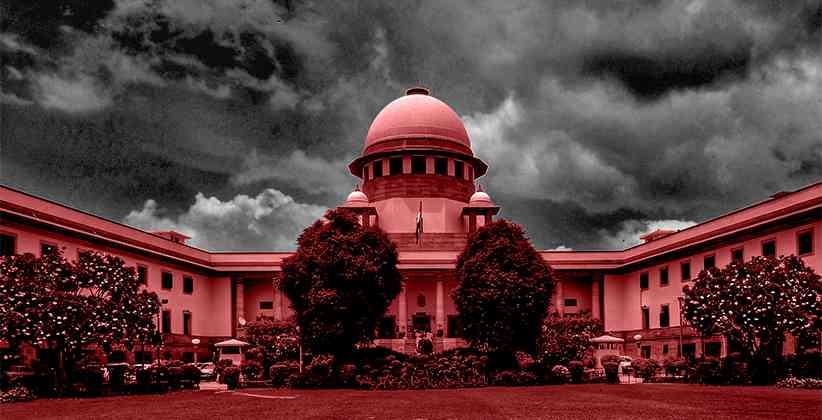 A Full Bench of Supreme Court headed by Justice L. Nageswara Rao and comprising Justices Krishna Murari and S. Ravindra Bhat had on June 03, 2020, dismissed the Andhra Pradesh Government’s Challenge of Andhra Pradesh High Court judgment dated March 10, 2020. In that judgment, the Division Bench of Chief Justice J. K. Maheshwari and Justice Ninala Jayasurya had while entertaining PIL directed the Government to remove colors identical to that of the flag of YSRCP which is the ruling party in Andhra Pradesh.

While dismissing the appeal of the Supreme Court had held that, “Executive orders are subjected to judicial review and the judgments of the courts which have become final should be followed by the compliance of the directions given therein. Any attempt to disobey the directions issued by courts would be subversive to the Rule of Law. Public confidence in the judiciary will be eroded if its orders are not obeyed.”

Writ Petition in the form of Public Interest Litigation had been filed by Muppa Venkateswara Rao seeking relief like Mandamus against the in-action of respondents in not restraining the ruling YSRC Party members (‘YSRCP’) in painting the Village Panchayat office building of Pallapadu village, Vatticherukuru Mandal, with the colors of its party flag. He had contended that such an act was unconstitutional, arbitrary, and illegal. The Court, while admitting the PIL on December 13, 2019, by way of interim relief, directed that the State Government to not paint the Government buildings with the colors of the flag of a particular political party.

The petitioner had contended that, with intent to have cheap election publicity, public money had been mis-utilized by the ruling party, putting the colors of their party flag on the Government buildings, i.e. Panchayat. For the development of the village, 80% of funds were given by NRIs., and the Government had only given 20% funds. As the villagers were neutral to all the political parties, they could not recognize such an act, which might amount to malpractice.

Another writ petition was filed inter alia, contending that, despite the interim order passed by the Court, the respondents had not restrained the members of the ruling YSRCP from painting the Village Panchayat office buildings/ Sachivalayas with the colors akin to its party flag. In that petition, the petitioner had prayed for appropriate directions that such painting of the Panchayat buildings/Sachivalayas with the colors of the party flag be declared unconstitutional, corrupt, illegal, and contrary to the provisions of the Representation of Peoples Act, 1951.

The Additional Advocate General (AAG) appearing for the respondents had contended that mere comparison of the colors of the party flag with the colors painted on the Gram Panchayat building had no clear nexus in view of the different shades. On the flag, those colors were in the vertical pattern while on the building, they were in a horizontal pattern, submitted AAG. It was further stated that the running of day-to-day administration was the exclusive domain of the Government and the petitioner cannot be permitted to question the painting of colors of Panchayat buildings in the absence to show any violation of the fundamental or any statutory right.

To dispose of the PIL, the Court had to answer the following questions,

Panchayats are established as per the provisions of Article 243-B of the Constitution and financed as per the Scheme of the Finance Commission. It had its structure as a local body of self-governance under the conferment of the powers specified in the Constitution and the buildings so constructed to carry out activities of Panchayat would be of the local body and authority being a Government agency, to which NBC applies, the Court found. As per Clause 3.3.2 of NBC, any sign of savoring political propaganda is not permitted in any circumstances on any Government Building covered by NBC.

As per the said judgment in Common Cause, vide order dated 23.04.2014, while dealing the issue to regulate Government action in the matter as to prevent misuse/wastage of public funds, by way of Government advertisement and to adopt the best practices, the Apex Court had constituted a Committee of three members to formulate guidelines, which had suggested guidelines which are known as “The Government Advertisement (Content Regulation) Guidelines, 2014”. The said guidelines were made applicable to all Government institutions, Public Sector Undertakings, local bodies and other autonomous bodies/organizations established under a Statute, exercising the power under Article 142 of the Constitution. These guidelines were brought with an object that the advertisements should not be by use of public funds in campaigning to gain political mileage by the political establishments. The activities of the Government must satisfy the test of reasonableness and public interest, particularly, while dealing with pubic office and public property.

In the present case, after referring the images of the proposed color scheme of the Panchayat buildings/Sachivalayams, YSRCP flag and YSRCP Office/Camp Office, the Court observed striking similarity as all had three colors, namely Green, White, and Blue, in horizontal lines in the Panchayat buildings/ Sachivalayams and YSRCP Office/Camp Offices and vertical lines in YSRCP flag with no color variation.

Based on the above observations, the Court proceeded to issue the following directions.

Subsequently, the State Government had filed Special Leave to Appeal against the Judgment, but the Supreme Court had dismissed the petition on March 23, 2020. Hence the judgment of the AP High Court hated March 10, 2020, had become final.

After the dismissal of the above said SLP and because sufficient time for implementation of a certain direction was not there, the Court had granted an extension of time for three weeks immediately from the date of the lifting of the lockdown.

The Government had issued the guidelines on color combination/theme for a painting of Gram Panchayat buildings on April 23, 2020. Again, the same petitioner challenged this new guideline through another PIL as the same colors of the flag of YSRC party, i.e., White, Green, and Blue, were selected in addition to Terra Cotta color, which prima facie, appears to be contrary to the directions of the Court.

The petitioner had contended that the Government without taking steps for removal of the existing colors which were directed to be removed, had issued new guidelines, with a view to bye-pass the orders of the Court and also asserted that there were no bona fides on the part of the respondents.

The respondent State had contended that it had formed the committee after deliberations since NBC (National Building Code) does not provide for color/color theme/color combination to be used in respect of Government building. The committee had felt that painting of said buildings shall be based on geographical and weather conditions, which reflect the prominence and socio-economic conditions of rural Andhra Pradesh such as Soil (terra cotta), Agriculture (green), Aqua (blue) and Dairy (white), etc., should be the main components of the color combinations of the Gram Panchayat Buildings.

The Court had found that no serious endeavor had been made by the respondents to ensure that the color combination for painting Gram Panchayat buildings should not be similar to the colors of the flags and office of political parties. The Court had also rejected the argument of the AAG that there were only seven colors available and most of which resemble party flag colors of one party or other, holding that there was no dearth of colors or combination of colors which the respondents could not find, other than those restrained by the Court. Such an action on the part of the respondents was nothing but deliberate attempt to overreach the orders of the Court, the Court observed.

The Court was also of the opinion that respondents had not complied with the orders of the Court. Rule nisi was issued to them on the first date of hearing, i.e., on May 05, 2020, as to why separate contempt proceedings are not initiated. In furtherance to the aforesaid, the Court directed the registry to initiate separate contempt proceedings be and list it for further orders on May 28, 2020. The respondents were also directed to be personally present before the court on May 28, 2020, to explain the reasons for non-compliance with the directions given in the earlier judgment dated March 10, 2020.