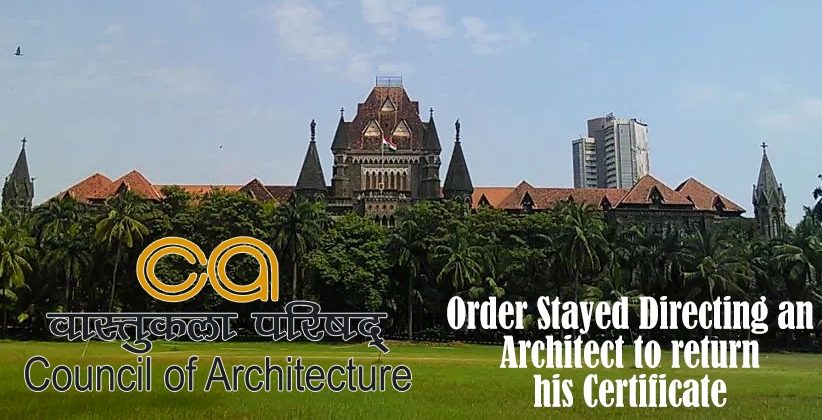 Judiciary Jul 14, 2020 : Shreedhara Purohit ( Editor: Ekta Joshi ) 21 Shares
21 Shares
The Bombay high court on July 11, 2020, stayed an order issued by the Council of Architecture which had directed him to return his registration certificate within 30 days.

Justice AK Menon observed that the court needed to exercise its extraordinary jurisdiction and grant protection to architect Anand V Dhokay given the Covid-19 pandemic and harsh consequences that the order of the Council of Architecture would have on Anand V Dhokay, who would have to stop his practice. Architect Anand V Dhokay had moved to the Bombay high court after the Council of Architecture issued the order dated June 2, 2020 (which he claimed to have received on June 27) and asked him to surrender his registration certificate after he took up a project with Slum Redevelopment Authority.

The Slum Redevelopment Authority had ended the appointment of another architect after which Dhokay was appointed for the project, which had seen the aggrieved architect approach the Council of Architecture. Architect Anand V Dhokay’s advocate argued that the order issued by the Council of Architecture was in breach of the principles of natural justice, as no show-cause notice was issued to him before passing the order. Architect Anand V Dhokay’s advocate also emphasized on the point that the architect Anand V Dhokay was being penalized since he had taken up a project with the slum redevelopment authority, upon the termination of the appointment of another architect for that project, and that was the evident cause of action for filing a complaint against architect Dhokay.   Architect Anand V Dhokay’s plea for interim relief was ineffectively opposed by the complainant, the architect whom Anand V Dhokay replaced for the project of Slum Redevelopment Authority. The complainant’s advocate submitted that the Council of Architecture had rightly called upon Anand V Dhokay to surrender his registration certificate for preventing him from continuing his practice based on an alleged breach of Regulation 2(1)(13) and (15) of the Architects Professional Conduct Regulations, 1989. Regulation 2(1)(13) and (15) of the Architects Professional Conduct Regulations, 1989 prohibits architects from engaging in unfair competition. Clause 2(1) (13) prohibits architects from not supplant or attempt to supplant another architect, whereas Clause 2(1)(15) states that they shall not attempt to obtain, offer to undertake or accept the commission for which another architect has been selected or employed unless the selection, employment or agreement has been terminated and a written notice is given to the other architect. Bombay high court has ordered that the matter be placed after regular court for a further hearing when working is resumed.