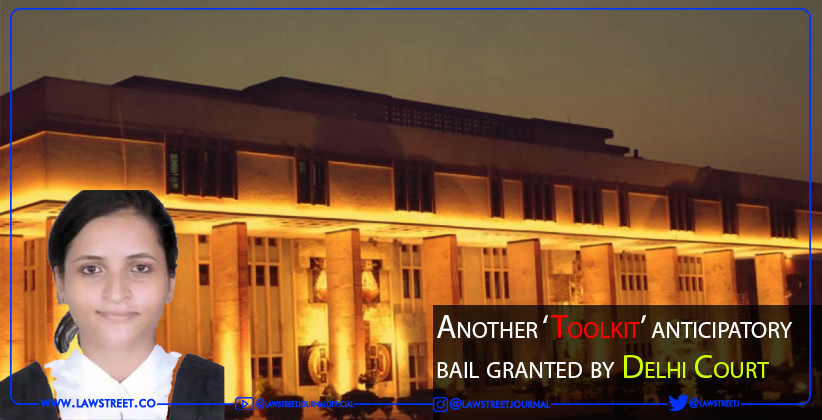 Rebecca John, senior advocate representing Nikita Jacob, in his submission said, “My bail ends on the 10th. I don't want all these matters to be heard together. It will create an unnecessary overlap.”

Currently the judge has adjourned the hearing on the matter till March 9, 2021. On February 17, the judge granted Nikita Jacobs a three week transit anticipatory bail.

Senior Advocate Mihir Desai, who had previously appeared for Nikita in the High Court submitted that she was a young lawyer for 7 years apart from being an “environmental enthusiast”   The court in the order said, “In my considered opinion creation of a WhatsApp group or being editor of an innocuous Toolkit is not an offence. Further, since the link with the said toolkit or PJF has not been found to be objectionable, mere deletion of the WhatsApp chat to destroy the evidence linking her with the toolkit and PJF also becomes meaningless. Further, it is rightly pointed out by Ld Defence Counsel that the protest march was duly permitted by the Delhi police therefore there is nothing wrong in co-accused Shantanu reaching Delhi to attend the protest march. Still further, the attempt to conceal her identity seems to be nothing more than an anxious effort to stay away from unnecessary controversies"

“The perusal of the said 'Toolkit' reveals that any call for any kind of violence is conspicuously absent. In my considered opinion, Citizens are conscience keepers of government in any democratic Nation. They cannot be put behind the bars simply because they choose to disagree with the State policies”, the Court observed.

Both Shantanu Muluk and Disha Ravi were granted interim protection in regard to this ‘Toolkit’ case.