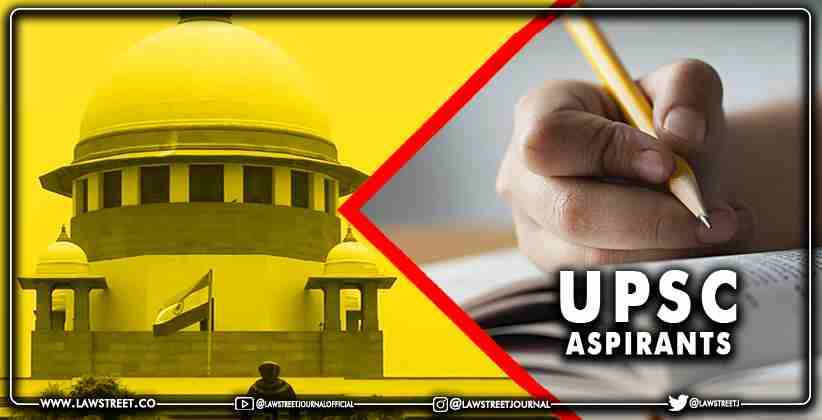 A group of 28 civil services aspirants, who couldn’t appear for the yearly UPSC exam which was held in October, 2020, have approached the Hon’ble Supreme Court by filing a writ petition seeking another attempt this year.

These candidates had their last attempt during October 2020, and could not appear for the same due to “exceptional circumstances” which were a result of the COVID-19 pandemic.

The bench that heard the following petition was a division bench which consisted of Justices AM Khanwilkar and Dinesh Maheshwari. On April 19th, the bench asked the petitioners to produce the advance copy of the writ petition on the Standing Counsel of the Union Public Service Commission (Abhishek Anand Sinha and others vs. Union of India and others, WP (c) 434/2021). The next hearing of the case is posted for July 8th,2021.

The petitioners have stated that due to the guidelines imposed on the state during the pandemic, such as mandatory quarantine, containment zone regulations, etc. they were prevented from attending the exam, hence resulting in the loss of their precious last attempt.

In the aforementioned writ petition, a bunch of candidates who had appeared for their last attempt in October 2020, have filed an intervention application. They have sought an extra chance because their preparation was affected by the ongoing pandemic and some of them were on duty to treat the virus and were “covid warriors.”

Some others were mourning the loss of their family members and others were battling with their mental health. It is said that they were compelled to attend the exam and it was their last attempt, even though they were not in the state to appear for a competitive exam due to the COVID-19 pandemic.

The extra attempt, if granted will save 10,336 students from the academic pressure and will benefit them. The petitioners are feeling resentful that UPSC did not consider their request.

Plea rejected by the SC in February

During February, 2021, SC dismissed a writ petition which sought an extra attempt for candidates who had already attempted their last attempt in October 2020. The name of the case is (Rachana and others vs. Union of India and others.) This particular plea pleaded for an extra attempt stating that the pandemic had hindered their preparation for the exam.

The bench led by Justice AM Khanwilkar dismissed the petition by station that the Court has limitations while interfering with the decisions of the executive. The bench observes that granting a special status to a group of candidates is partial on behalf of the court and has an effect as a whole.

However, during the oral hearings, the bench has repeatedly urged the Centre and UPSC to take a favorable stance for the petitioners by reconsidering. The bench suggested that this can be favorable without relaxing the age-bar. The Union firmly stated that extra chance cannot be given, the court accepted it stating that judiciary cannot interfere in the internal matters of the executive. Initially the Centre and UPSC has mentioned to the court that both of them, mutually, have agreed to offer a “one-time, restricted relaxation” to the candidates who had given their last attempt of UPSC in October 2020.

However, the Centre and UPSC changed their stance later, after the petitioners demanded the age-bar relaxation.

On September 30th, the SC had directed the Central Government and the UPSC to consider the relaxation for the candidates with the age-bar relaxation. The direction was given by a bench led by Justice Khanwilkar in the case Vasireddy Govardhana Sai Prakash v UPSC, while rejecting the plea to postpone the UPSC exams in the view of the COVID-19 pandemic.