Woman’s conversion to Islam not to be a relevant fact while ensuring protection of interfaith couple: Allahabad High Court 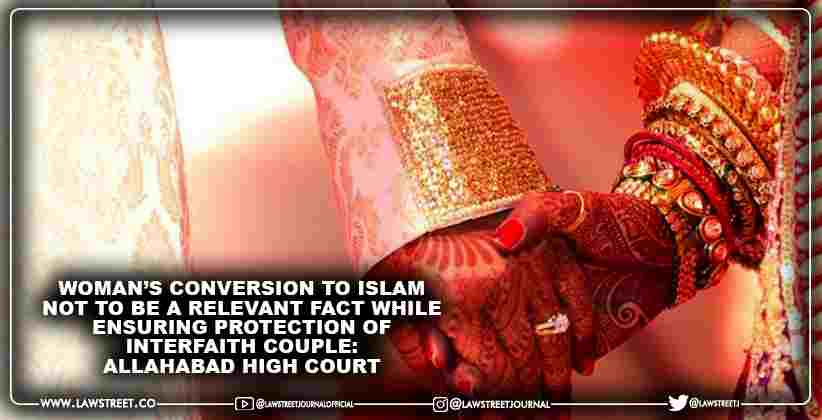 Dealing with the plea of an inter religious couple who alleged that private respondent is interfering with their marital life and liberty, the Allahabad High Court on Tuesday (June 8, 2021), clarified that the fact of the petitioner (girl) having converted to Islam would not be relevant factor while ensuring that there is no interference in the liberty of the petitioners.

The bench of justice Salil Kumar Rai was hearing the plea of a girl aged 20 years, who converted to Islam and man aged 40 years, and they sought direction upon the respondent not to interfere with their marital life and liberty.

They claimed that they are major and have solemnised marriage out of their own free will and also alleged that private respondent is interfering with their marital life and liberty.

Referring to the Apex Court's ruling in the case of Lata Singh versus State of UP AIR 2006 SC 2522, the court observed that law is settled that it is the right of a couple to live peacefully without any interference in case they are major.

Further, the court observed that in view of the clear enunciation of law by the Supreme Court in Lata Singh’s  case, it is obligatory for the concerned authorities to ensure compliance of the above directions in view of article 141 of the Constitution of India.

The court said that in case petitioners face any genuine threat to their life and liberty, or they are harassed contrary to the law laid down in Lata Singh case, it shall be open for them to approach the Senior Superintendent of Police of the district concerned and furnish necessary details in that regard like proof of their majority marriage and alleged harassment etc., who shall take all steps as may be required in law to ensure that petitioners life and liberty are not interfered with.

“That petitioners, if major, are entitled to live together even if not married and therefore proof of their marriage would not be required and shall not be insisted upon by the concerned police officer. It is further clarified that the fact of the petitioner having converted to Islam would not be a relevant factor while ensuring that there is no interference in the liberty of the petitioners unless there is any allegation by petitioner number one regarding forcible conversion.”