Advocates Who Stay in Delhi NCR To Be Issued Weekly Passes 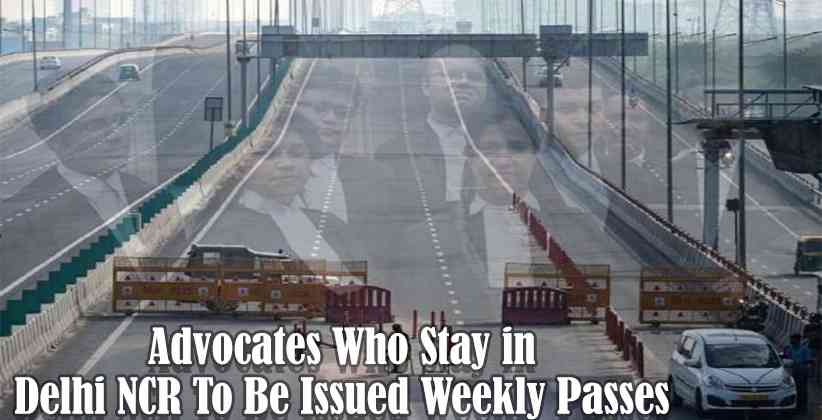 Legal Insiders May 19, 2020 Ghazal Bhootra ( Editor: Ekta Joshi ) 15 Shares
15 Shares
To provide simple access to lawyers with residences in the NCR region of Delhi, Haryana authorities have decided to issue e-passes to all advocates/staff on a weekly basis. This comes as a relief to those who wished to visit Delhi for court and official work but could not do so due to restrictions on interstate travel.

For the passes, Advocates may use the following emails to forward their application to Bar council Delhi at barcouncilofdelhi@rediffmail.com with the following details to ACS Home Department at secyhome1@gmail.com  and cc to Sh. Anil Grover, AAG, Haryana at groveradvocate@gmail.com Following are the details that should be provided in the e-mail application:

After the e-mail application, advocates would also need to send their applications on ‘Saral Haryana’ site, for quick issuing of e-passes for their travel to Delhi. Sanjay Rathi, Co-Chairman, Bar Council of Delhi stated that after taking consideration of guideline 7(f) issued by the Ministry of Home Affairs on May 1st, 2020, the working of private offices and organizations has been allowed. Therefore, lawyers within Delhi and outside Delhi have the right to come to their office and attend to their work. The advocates who stay in NCR are not being allowed to cross borders by the State of Haryana and Uttar Pradesh, though they are bound by the guidelines issued by Ministry of Home Affairs dated May 1st, 2020 and the movement of lawyers cannot be restricted in violation of Article 19(1) (d) State of UP in their counter affidavit said that advocate can apply to their Nodal officer for passes. He further added, "The State of Haryana has agreed to issue weekly e-passes to all advocates/staff, who want to visit Delhi for court/legal work. Interested Advocates may forward their application to Bar Council of Delhi". This comes after the petition seeking inter-state movement of lawyers during lockdown measures where the Supreme Court of India stated: “No one is stopping you from going to office. Needless to say, lawyers’ offices are exempted”. The Delhi Bar Council had filed an appeal before the High Court of Delhi seeking for court’s decision to allow lawyers to move in and out of Delhi to present in courts and their respective office, in array to seek interstate movement of lawyers.  The Bar Council of India had written previously to the High Court with respect to the issuance of passes for the matter at hand. They asked that this would be done in coordination with the State Government and Police Department. This is also apparent because the third phase of the lockdown is by its nature a little lenient as compared to phase 1 and 2. The Bar Council of India had moved the High Court of Delhi on the matter of interstate travel of lawyers. The plea sought the High Court's order to permit lawyers to move in and out of Delhi to attend courts and work from their respective offices.