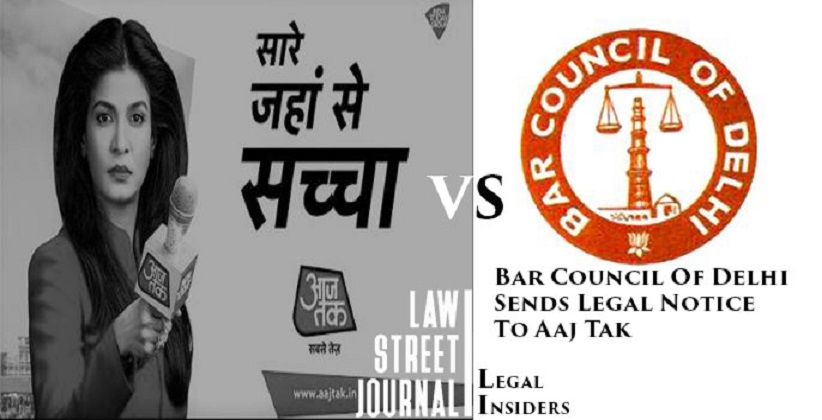 Legal Insiders Nov 21, 2018 Lawstreet News Network ( ) 4 Shares
4 Shares
The Bar Council of Delhi (BCD) has sent a legal notice to news channel Aaj Tak for causing disrepute to the legal profession and damaging the reputation of the members of the profession in its program titled ‘Sare Jahan se Sacha’.

The notice states that in one of the promos the channel depicts negotiations between a lawyer and his client about a rape case. The lawyer is shown as saying “bachche hain, galti ho jaati hai” (They are kids, they make mistakes) and “shamelessly demanding fees and extracting bundle of notes from a client to do the needful”. The notice contends that the promo telecast is indubitably defamatory and casts serious derogatory aspersions on the legal profession. Moreover, the manner in which the lawyer was presented denigrates, scandalizes, and causes disrespect to the legal profession and seriously damages the image and reputation of members of the profession.

“The contents of the advertisement/promo of your TV program in toto is against the dignity, integrity and image of the noble profession of lawyers, apart from the contents being absolutely unethical, unprofessional and demeaning the whole issue of crime and violence against women, which is not expected from an esteemed and prime institution of electronic media like Aaj Tak,” the notice reads. The Bar Council has, therefore, demanded that Aaj Tak immediately stop the telecast of the promo and also tender a public apology, failing which it would take civil and criminal action against the organization and the concerned persons. It has further demanded the organization to disclose the names with complete address and other details of the institutions/channels where this program has been telecasted till date along with delivering all the edited and original footage of the said program.