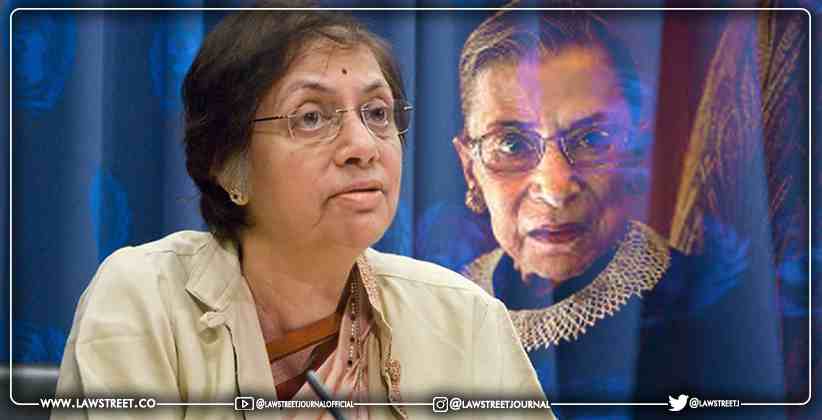 On July 5, 2021, Justice Manohar and seven other jurists from around the world were honoured at an international meeting of jurists organised by non-governmental organisations (NGOs) in Madrid, Spain.

The award takes after eminent jurist Ruth Bader Ginsburg, a former Associate Justice of the United States Supreme Court from 1993. Its purpose is to honour outstanding female jurists who have defended and strengthened the rule of law around the world, as well as consolidated society's progress toward gender equality.

Justice Manohar is Justice Kantilal Thakoredas Desai's daughter. She has won numerous awards in her illustrious career spanning four decades, and this award is just another feather in her cap.

After studying philosophy, politics, and economics at Oxford, Justice Manohar was called to the Bar at Lincoln's Inn in London. She began her legal career in Bombay in 1958 and was appointed a permanent judge of the Bombay High Court in 1978. She was later appointed to the Supreme Court in 1994.

In December 1986, Justice Manohar was one of two Indian High Court Judges chosen to participate in a course on Patent Trial held in Beijing under the auspices of WIPO and the United Nations. She was the Chairperson of the Bombay High Court's Committee of Judges formed to establish Family Courts in Maharashtra.

According to Justice Manohar, she met Justice Ginsberg in Washington when the latter was named an honorary bencher of Lincoln's Inn. "Justice Stephen Brad introduced me to her. I was there by chance because I am also an honorary bencher. It was pleasant."

Justice Manohar had a  message for aspiring female attorneys wherein she said, "They should not be discouraged if they face prejudice; instead, they should continue their good work. When Justice ( Retd) Sujata MI was practising in the Bombay High Court, there were probably 6-7 female lawyers, so that was a very basic barrier."

"However, we are rapidly approaching a point where prejudices are gradually dissolving," she added.

Justice Manohar accepted the award virtually. It is given in honour of Justice Ginsberg's daughter, Jane Ginsburg, a Columbia University professor.

The World Jurist Association and World Law Foundation, both of which are led by F. Javier Cremades Garcia of Spain, are non-governmental organisations with special consultative status with the United Nations Economic and Social Council. The World Jurist Association, in collaboration with the World Law Foundation, has led a global campaign to promote the rule of law as a guarantor of peace and freedom.