Chief Justice and Judge of Kerala High Court Donate Rs. 25,000 Each for Treatment of Children with Rare Disease [READ ORDER] 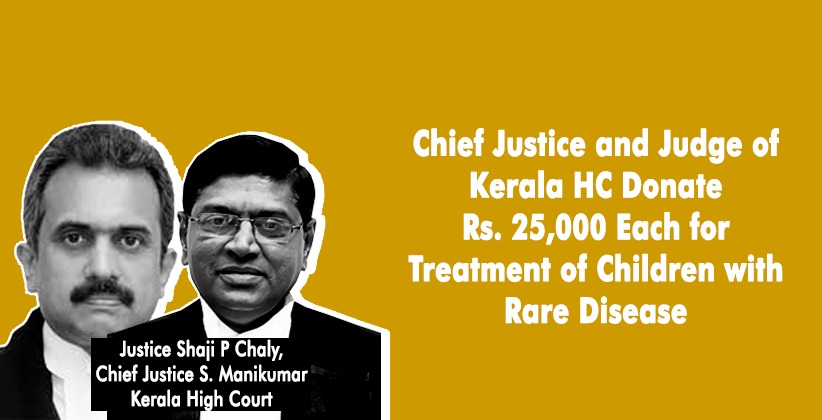 Also Read - Trial Will Not Become 'In Camera' Unless Witnesses are Provided with a Comfortable Atmosphere to Depose Freely: Kerala HC

The disorder affects multiple organs and also causes progressive physical or mental deterioration over time. This is a rare disease that affects 1 in 5000 births as a group. The treatment options for LSDs undergo a variety of therapies.

According to the petitioner, the approximate annual cost for the treatment would be Rs. 1,72,22,400.  As a result, many children with LSDs are succumbing to the disorder due to a lack of proper therapeutic care and medical support. The Government of Kerala was ordered to ensure that an amount of Rs 50 lakhs is deposited for the purpose of treatment of children. Mr.Rajan Khobragade, Principal Secretary to Government, Health and Family Welfare Department then appeared before the court and admitted that there is a delay in implementing the directions of the Court orders. He submitted that thereafter a meeting was convened at the highest level and a sum of Rupees Fifty Lakhs has been deposited in the special account created for the treatment of children affected with rare diseases. Bharat Petroleum Corporation, Indian Oil Corporation, and Hindustan Petroleum Corporation are the Oil Marketing Corporations which were directed to take appropriate decisions on providing necessary funds for treatment of children affected with rare diseases as part of Corporate Social Responsibility. They told the court that they were not in a position to make contributions as large amounts of contributions have already been made from its CSR funds for CVID-19 related activities in the current financial year. The Court had made an appeal to the legal fraternity to contribute to the State level corpus fund for the treatment of children with rare diseases and the advocates are facing technical difficulties in making online payments to the special account.   The Chief Justice of the Kerala High Court, S Manikumar, and Justice Shaji P Chaly then deposited Rs 25,000 each in the special account created by the Kerala Government for the treatment of children with rare diseases Taking note of the steps taken by the Kerala Legal Services Authority and the need to provide sufficient funds for the continuous treatment of children this notable development took place.    [READ ORDER]

Trial Will Not Become 'In Camera' Unless Witnesses are Provided with a Comfortable Atmosphere to Depose Freely: Kerala HC

Judiciary Nov 24, 2020 Richa Shah ( Editor: Ekta Joshi ) 1 Shares
1 Share
For a trial to become an ‘in camera trial’, the witnesses have to be provided with a comfortable atmosphere to depose freely and is not merely an ‘in camera trial’ because it is held inside a closed court hall, the Kerela High Court observed in an order dismissing the applications filed by the prosecution and the victim seeking to change the judge holding trial in the sensational actor sexual assault case of 2017.Contentions were raised as in a case stating that the very purpose of...
Read full post

Judiciary Nov 23, 2020 Richa Shah ( Editor: Ekta Joshi ) 34 Shares
34 Shares
On Thursday (19th November 2020), the Kerala High Court refused to issue any direction to the State Government or the Union Government to overlook its Guidelines (Covid Protocols) and to follow the guidelines of the World Health Organization.The bench consisted of two judges: Chief Justice S. Manikumar and Justice Shaji P. Chaly.The members of Muslim community filed a PIL basically seeking directions to State and its officials and the Union of India in regard to the management of the dead body...
Read full post