An understanding necessary between bar and bench for efficient functioning of Judicial System: CJI Bobde in farewell speech 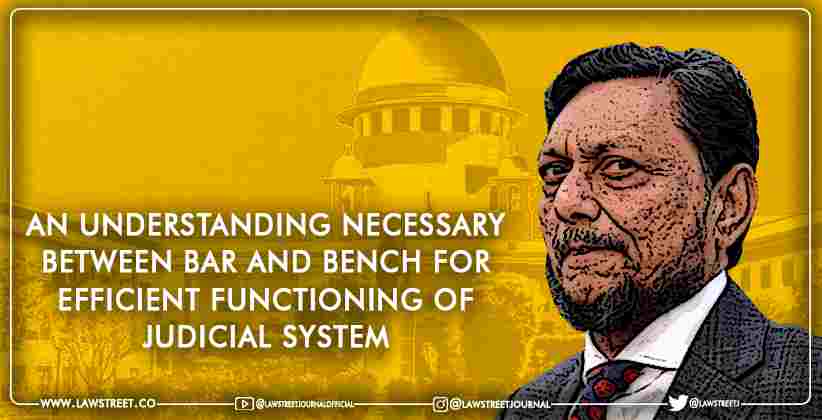 CJI Bobde emphasized the importance of communication and a healthy relationship between the bar and the bench for the efficient functioning of the judiciary in his farewell speech.

As per him, this will enable the judiciary to carry out its sole duty without any obstacles as the most important function of the judiciary is to protect the life, liberty and property of the citizens.

The farewell ceremony was held virtually by the SCBA. CJI Bobde said that the area which has been drawing a lot of attention is the communication and relationship between the bar and the bench. He further stated that he does not intend to criticize anyone. Both the parties are at fault equally.

This statement arises from the incident that occurred earlier in the day, where the SC witnessed a faceoff between CJ Bobde, Justice L Nageswara Rao and Justice Ravindra Bhat and some other members of the bar, on the decision of the bench to take suo moto cognizance of COVID related issues, while the HC were already overseeing them.

Another issue was related to the bench’s appointment of senior advocate Harish Salve as Amicus Curiae in the matter.

During the ceremony, CJI Bobde started his speech off by saying, “Since the beginning of the day I have discovered new cause of becoming speechless. I have a lot to say, but I can’t find words to express how I feel. I discovered there are some things which one can say, I shall endeavor to say them. The atmosphere is such that nice words about a person surprises them. It is very pleasant to hear good things about oneself.”

“I am not saying we should be an association of people who keep complementing each other and refuse to point out the faults, but it is this communication and relationship the deepens the fulfillment of the most important function of the judiciary,” he continued.

He clarified that he did not intend for there to be a society filled with people who complement each other, but the bar and bench must have an understanding relation. He states that he does not wish to lecture on these aspects.

He added further, “Having served at Bombay HC, Madhya Pradesh and now Delhi, I can agree that it is the relationship of the bar and the bench that matters most for the judiciary. When I took oath as the CJI, I had not imagined the complexity of the task. It takes a lot of time to understand. You have to do your best. The variety of litigation before the SC is enthralling, the lawyers are very capable and qualified.”

Chi Bobde outlined how the pandemic required him as the CJI to learn new things, how the virtual mode of courts came into being and that to acquire justice one must have a technological device which is kind of unequal.

He wished to issue a warning that AI is set to grow a lot in the coming future and we should be wary of it. At the end, CJI Bobde gave hope to the young members of the bar who were disheartened by the pandemic and asked them to not lose hope and to keep going.