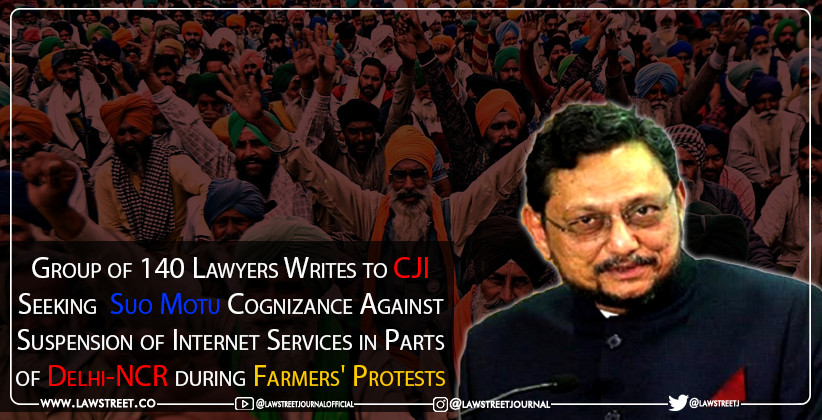 Legal Insiders Feb 04, 2021 ADITI AGGARWAL ( Editor: Ekta Joshi ) 8 Shares
8 Shares
A group of 140 lawyers have written an open letter to the Chief Justice of India against suspension of internet services in parts of Delhi-NCR, during the ongoing farmers’ protests.

This order was extended after violent encounters at Singhu Border on January 29,2021. The internet services at Singhu, Ghazipur and Tikri border areas remain suspended.

As per the order, it is necessary to suspend Internet services in ‘the interest of maintaining public safety and averting public emergency.’ The letter petition on behalf of farmers’ by Delhi High Court lawyersSitwat Nabi Abhisht Hela have alleged that on 29th January for the first time, the protest venue faced the brunt of violence from the local hoodlums who turned the site into a soft spot for violence. It is also alleged that around 200 men claiming to be local residents barged into the protest site at Singhu Border, where they pelted stones, damaged properties and attacked the protestors despite the presence of heavy security of the police.

“The outcome was also an Internet shutdown- much to our dismay,” the letter states.

Referring to the cases of Anuradha Bhasin v. Union of India (2020) and Foundation for Media Professionals v. Union Territory of Jammu and Kashmir and Another (2020), the lawyers alleged that the suspension of internet order issued by the MHA is a ‘gross misuse of power’ by the Central government that is causing disruption to the protestors and individuals in exercising their fundamental right to access to the internet under Article 19(1)(a) of the Indian Constitution. The Supreme Court had cautioned that magistrates, while passing prohibitory orders, should apply their mind and follow the doctrine of proportionality. Further, the letter states:

“Under the garb of maintaining peace and security, protesting farmers are being attacked, castigated and also have been facing scarcity of food and water supply due to road blocks and internet shutdown.”

The lawyers also contented that embedding more than 2000 iron nails, multi-layer metal barricades, cement walls, and heavily armed security officials cannot be considered as law-and-order situations and are depriving the protesting farmers of their basic human rights and are in gross violation of the Right to Life enshrined under Article 21 of the Constitution. They also put the attention on the biased reporting by few mainstream media channels. They wrote:

“Labeling farmers as “terrorists” by the mainstream media and airing provocative content is a pressing issue which the Hon’ble Supreme Court is also currently dealing with.”

“History will not pardon us if we remain mute spectators to this violation of human rights,” the letter states at the end.