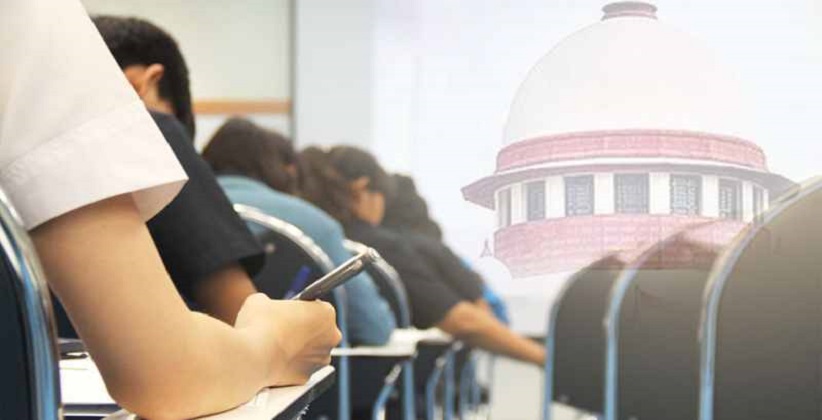 Students appearing for CLAT examination in the state of Jharkhand have filed a petition in the Supreme Court of India challenging the Jharkhand High Court’s order for not providing them relief when the NLSIU Bangalore announced to conduct a different examination for admission in this academic year and will not be relying on CLAT examination. This whole thing started when on September 3rd, 2020 National Law School of India University announced that they will be holding a separate exam for admissions called National Law Aptitude Test-2020 0r NLAT 2020. The CLAT is scheduled to be on September 28th, 2020 whereas the NLAT 2020 was held on September 12th, 2020, and again a re-exam of NLAT held for the students on September 14th, 2020 for the students who complained about technical glitches. The petitioners were of the view that NLAT defeats the whole purpose of the consortium as well as in this time of pandemic it just increases the burden and multiplies risk as students have to appear in the different examinations. Though the NLAT was an exam that will be given by the students from their locations but still there is nothing that can be done to reduce the risk of cheating and jeopardizing the admission procedure itself.

The Petitioner contended in SC on different grounds such as:-

The petitioner also said that there were many loopholes in the exam conducted on September 12th, 2020. There was no response from the helpline number given, issues related to login, time was less, absence of test centers in 8 states and 5 UT’s, arbitrary warnings given to students, usage of unfair means, mismanagement, etc.

The petitioners filed a plea in the High Court of Jharkhand, the court said “In the view of the aforesaid factual and legal position, I am of the considered view that since the present matter has pan India ramifications and petitioners have failed to make out a strong ground so as to invoke the extraordinary writ jurisdiction of this Court which is otherwise plenary in nature, it would not be appropriate for this Court to interfere with the notice dated 03.09.2020 issued by NLSIU Bangalore. The writ petition is, accordingly, dismissed”. The order was passed by Justice Rajesh Shankar.

The re-exam of the NLAT was conducted on the September 14th, 2020 for students complaining technical glitches and the, a controversy aroused that the paper has been leaked for the re-exam. The NLSIU issued a statement regarding this that “The test paper was accessible to candidates only after they logged in to the platform. Thereafter, it appears that some candidates have copied the questions and circulated this on some messaging apps/emails after logging in.

While this is a malpractice under the NLAT proctoring guidelines, it does not affect the integrity of the exams as questions were already available to all candidates after login”.