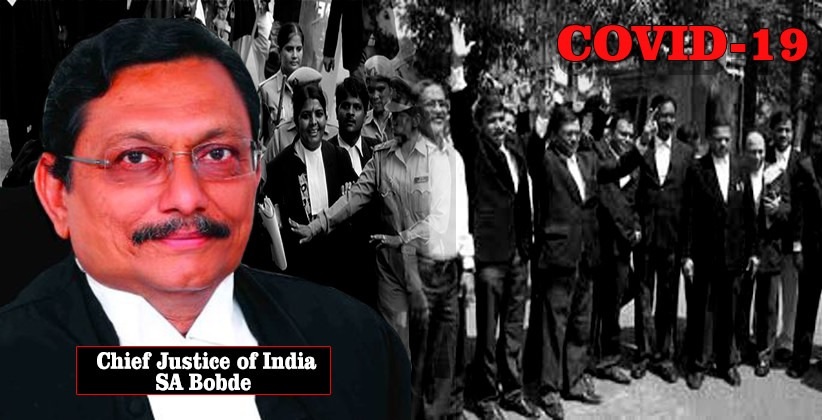 In the wake of novel COVID-19 virus, the whole country is in lockdown pushing our economy on the verge of collapsing. Due to this lockdown, courts are also closed and only urgent matters are being heard. The independent young lawyers are the ones who are suffering the most as their earning was only hand-to-mouth.

Taking cognizance of this issue, a letter-petition has been sent by Advocates Pawan Prakash Pathak and Alok Singh to the Chief Justice of India SA Bobde requesting the creation of an Emergency Fund for the starving lawyers. The request is made as per the provisions of Advocates Act, 1961 & Advocates Welfare Scheme, 1998.

The letter reads as "the current health situation should not be viewed as some unique or unexpected exogenous crisis, on the contrary, it is very much endogenous to the protracted structural crisis of capitalism along with huge persistent income inequality, unemployment, inaccessibility to proper health care by the working class, inaccessible quality education and other essential services".

"…If the lockdown further extends then this poses a serious threat to the life and liberty of the Advocates who have litigation as their only source of income. It's time that the protector of fundamental and legal rights takes care of this responsibility as one class (Bar and Bench), rather than waiting for State or Union relief fund as they have to take care of other professions and citizens at large".

The letter as mentioned the fact that the young lawyers are already suffering due to this lockdown, their position will further deteriorate due to coming summer vacation break.

…the situation is getting worse day by worse day by day and we have limited supplies in hand with additional burden of paying for our Rented Accommodation, Food & Medical bills. It is humbly submitted that we are not advocating for the "financial aid" as our "fundamental right" during the current pandemic.Through the instant letter we are only sharing the plight of Young Independent Advocates who are facing the wrath of time."

"It is humbly submitted that the Advocates Act, 1961 provides with the provision for creation of financial fund for Advocates in order to protect their rights, privileges and interest. Therefore, it is humbly prayed that; kindly invoke that power under the Advocate Act, 1961 and create an Emergency Fund for the Young Independent Advocates in need of financial assistance during COVID 19".

As Indian Economy is already coping with rising unemployment, interest rate and fiscal rate, the pandemic will be a major blow. Finance Minister Nirmala Sitharaman also announced a budget of $23 billion to tackle this economy malady. RBI also announced sharp cuts in the Interest rate to make facility of credit much easier for the failing businesses.

Currently there are nearly 162 countries which are in the state of complete lockdown.