Five High Courts have 54% share in total pending cases of over 57.51 lakhs in 25 HCs: Supreme Court 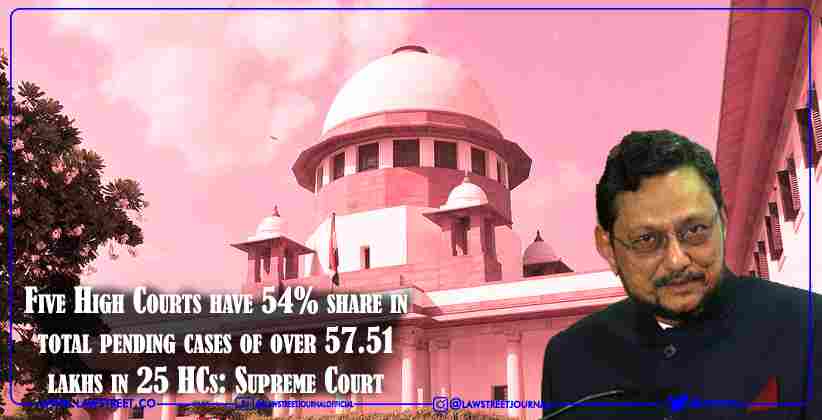 Legal Insiders Apr 23, 2021 Snehal Khemka ( Editor: Ekta Joshi ) 1 Shares
1 Share
Five High Courts namely those of Allahabad, Punjab and Haryana, Madras, Bombay, and Rajasthan — have an approximate 54% share in over 57.51 lakh pending cases in 25 high courts of the country, the Supreme Court on Tuesday/(April 20, 2021) said while paving way for the appointment of ad-hoc judges to tackle docket explosion.

A bench headed by Chief Justice S A Bobde, by a verdict, activated the dormant and rarely-used Article 224A of the Constitution that allows the Chief Justice of a High Court to appoint a person who has been a judge earlier to sit as a judge of the court with the previous consent of the President and further helped pave the way for appointment of retired high court judges as ad-hoc ones for a period of two to three years to clear the backlog. The bench comprising of Justices S K Kaul and Surya Kant, said that the primary purpose of appointing ad-hoc Judges is to deal with the group of cases which have been pending for over five years.

The judgement, penned by the CJI, referred to the data of National Judicial Data Grid (NJDG) and said it shows that five (5) High Courts alone are responsible for 54 percent of the pendency of over 57,51,312 cases the High Courts of Allahabad, Punjab & Haryana, Madras, Bombay, and Rajasthan.

The Madras High Court has among the highest arrears in the country of 5.8 lakh cases despite having fewer vacancies than most other High Courts (i.e. 7 percent). This does not take away from the requirement of appointing ad-hoc Judges but supports the view that even if the existing vacancies are few, a situation may arise requiring the expertise of experienced Judges to be appointed as ad-hoc Judges, it said.

On the other hand, the Calcutta High Court has one of the highest vacancies to the tune of 44 percent of sanctioned strength of judges, but it has half the arrears of pending cases in comparison to 2.7 lakh pending matters in the Madras High Court, the judgement said.

In such a scenario, it is apparently the absence of strength of the Judges which may be responsible for creating the arrears and, thus, giving rise to another scenario for appointment of ad-hoc Judges. The NJDG data shows that 56.4 percent pending cases were filed within the past five years whereas 40 percent of the pending cases were filed between 5 to 20 years ago. The primary purpose of appointing ad-hoc Judges is to deal with the latter group of cases that have been pending for over five years, it said and referred to the chart showing percentage break-up of cases pending before High Courts for different periods of time as on April 4, 2021.