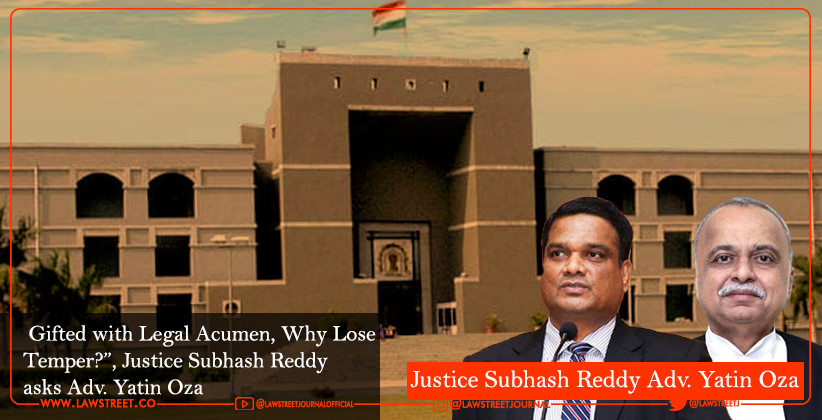 During the hearing of this petition on Wednesday (March 10, 2021), he was quoted saying to Advocate and GHCAA President, Mr. Oza:

"Hearing you on several occasions, I used to wonder that you have been gifted with so much legal acumen by God, so why would you lose your temper? Why must there be complaints against you day in and day out?"

Mr. Oza responded by accepting his mistake, "With folded hands, I say that never ever will this happen again. I would rather quit my practice than let this happen again.”  Justice SK Kaul went on to ask him, “You have argued so many matters, you have so much knowledge, why do you do this? It is said that when one has neither the facts nor the law on their sit then when one resorts to this. But you have both the facts and the law on your side. So why do you do this?" It was subtly prayed by Mr. Oza, "It is probably out of my uncontrolled impulsiveness and over sensitivity. It is a weakness but I have overcome it completely. What can I say other than tendering an apology. I have learnt the lesson of my life. This will not happen again. I don't even want to be the President of the Bar Association. As soon as this gets over, I will resign. Individually, there is no problem. I am sure that it cannot and will not happen again. Please take the kindest of approach available.”  Justice Kaul further said that he needs to retrospect and further commented, “.How can it be that when you become President, all objectivity is lost? "You have to re-establish your credibility with your own court. You should concentrate on your ability in the law and address them in such manner. You don't need to confront them. You do not get relief by confrontation, but by persuasion.” During the hearing, Mr. Oza has asked for the permission of the court to make a brief submission:

"Previously, at the outset itself, I had used an adjective against myself. Your Lordships are right that there has to be a connectivity between the tongue and the mind which got lost in my case. And not just once, but twice or thrice. I have understood, I have realised and I assure Your Lordships that there will be no next time. If there is, whatever action is deemed fit by the High Court may be taken. What happened last year was out of complete frustration. But I am not justifying it. Such language could not have been used. I have categorically stated that I have said nothing against the High Court judges. In fact, these judges are working overtime to ensure justice to the people!"

Justice Kaul pointed out, "You have said that the High Court judges are corrupt. Then you say that you did not say anything.” Mr. Oza pleaded saying, "I have absolutely no excuse. What I did was unpardonable. I am obliged for Your Lordships' grace. I am short of words to express this.”  He was intervened by Senior Advocate, Dushant Dave who on his behalf attributed his frustration to the challenging times the lawyers, as a community had to go through owing to the COVID pandemic and how they had to suffer “beyond imagination.” He pointed out how 500 lawyers had donated Rs 25,000 each along with other senior colleagues at SCBA.  He further said, “"I, as the President, understand that it was an unimaginable situation and the plight of the young advocates was severe. I had lawyers sitting outside for four hours every day for money. As the leader of the bar, there was pressure on our head. I agree that Mr Oza could have handled things a little differently, but what he did must not be condemned like this.” Justice Kaul empathised with the suffering of all persons and said, “"Those timings were difficult for all people, all professions. Of course, the youngsters had to suffer the most. That is why every time the government came at a belated stage in appeal to this court, I imposed costs which I required to be diverted to be Advocates Welfare Fund. There are no two ways about it that these were difficult times.”

CA Sundaram, Senior Counsel was quoted saying, "The advocates themselves are appealing to Your Lordships to consider this case in context of the situation then, when the advocates were suffering greatly. The advocates were pleading with Mr Oza to help them out, to do something, they said 'You are the President'. The entire frustration of the bar reflected in what happened. Please suspend this order for six months to see his behaviour. Everything goes away then and it won't be a problem."

Justice Kaul said, “Our suggestion is not very far away from your thought process ", Justice Kaul said.  AM Singhvi, Senior Advocate supported Mr. Oza saying, "Even if Mr Oza were deaf and dumb, he cannot afford to be unmindful after what he has undergone in the last seven months. He will be told so in much harsher words by us… This is the 101st straw that broke the camel's back.” Lastly, Senior advocate, Arvind Datar urged, "For 4 years (after the Supreme Court had extended caution to Mr Oza in 2016), nothing happened. He maintained a very cordial relationship. Chambers were built… Let this be the 101st instance. No more tolerance after this", urged senior advocate Arvind Datar.

Legal Insiders Apr 16, 2021 Prachi Jain ( Editor: Ekta Joshi ) 5 Shares
5 Shares
An intervention application in the High Court has been moved by Gujarat High Court Advocates Association, seeking directions to the Government of Gujarat to frame proper guidelines, that the effect of the pandemic can be relieved on citizens by warranting a rational government action.It has requested framing of proper guidelines and making sure that public resources are available to all sections of society is of paramount importance at this juncture of the COVID-19 situation.Advocate Rakesh H....
Read full post