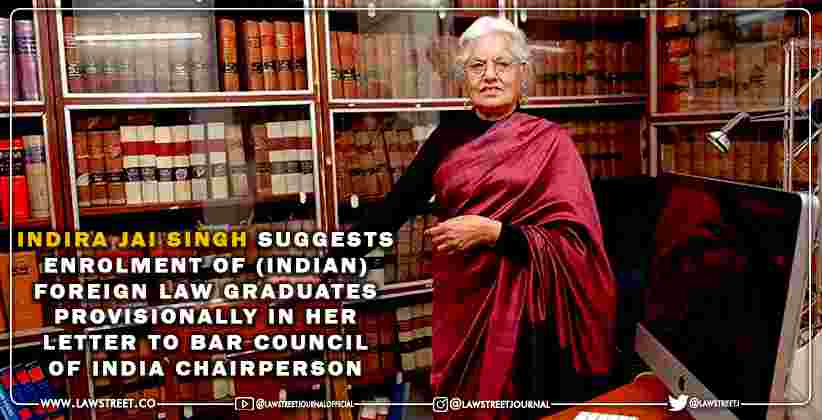 Senior Advocate, Indira Jai Singh drew some light on how foreign law graduates face difficulties as their results of qualifying exams get delayed. Thereafter, she requested the Chairperson of the Bar Council of India to consider providing these students with provisional enrolment by laying down conditions as the BCI deems fit.

In her letter, Singh said, "I have received many distress calls, from graduates who have been waiting for the last one year to be enrolled as Advocates in India under the Advocates Act of 1962.”

To practice in India, foreign law graduates are supposed to take an exam conducted by BCI. Due to the pandemic, the said exam was postponed from May 2020 and was held on November 27, as under a new pattern. However, its results have not even declared yet.

Singh, in her letter, could be quoted saying, "The delay of enrolment has caused great mental worries to foreign law graduates and their parents who have spent huge amount of monies on their education abroad. They have lost one year in the process even though they have studied in prestigious universities. Many of them are holding LLM degree and some have qualified as Solicitor and Barrister. Some have also undergone conversion course for one or two years in the National Law Schools in India."

She also stated the exam was conducted in November after repeated delays and under a new pattern, and that too without any model papers to guide the graduates taking the exam.

She further said, "To set right all this injustice, and in the event, the results cannot be declared immediately, I request you as a responsible member of the profession and a concerned citizen, to consider provisionally enrolling the foreign law graduates as Advocates immediately with such conditions as BCI deems fit and proper.”

There are about 150 graduates that are waiting to be enrolled.

Lastly, she urged, “These young people can add value to the profession and work in public interest, enhancing the pool of legal aid lawyers if need be or in other public spaces as qualified advocates. It is a shame to lose a valuable human resource in this manner."