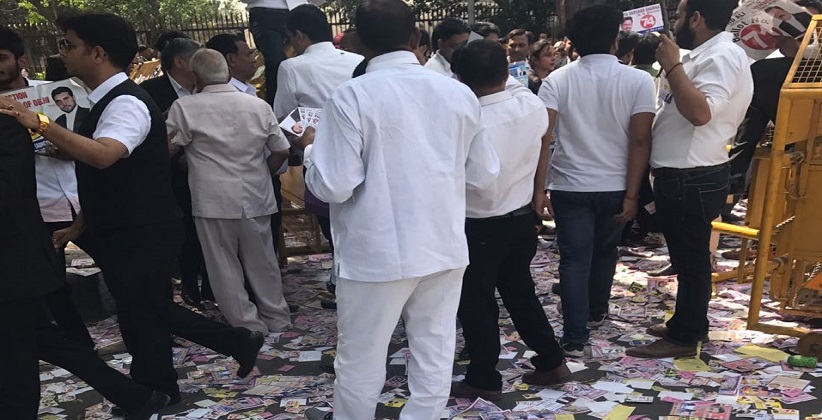 Elections are the time to seek maximum votes. Apparently, it should be done within the well-set guidelines of the concerned authority, but campaigners use money power, political power, muscle power, liquor power and sometimes not even spare the Mother Nature to achieve their goals.

The same has been observed during the recent Bar Council of Delhi elections when campaigners started strewing pamphlets around the premises of Delhi High Court on March 16th and 17th where the polling was taking place.

Unfortunately, this was not an isolated incident. Whenever the Delhi University goes to polls, the whole campus is defaced with pamphlets and posters. The situation got so worst that it even grabbed the attention of National Green Tribunal (NGT) and they directed the Delhi University to strictly ensure that no posters or pamphlets are put on the wall of its premises or strewn on the roads.

Recently, in the month of February the Bar Council of Tamil Nadu and Puducherry, acknowledging the marred campaigning during elections has issued directions ahead of the elections to the State Bar Council. One of the directions stated that "the candidates are requested not to put up posters, banners and distribute of pamphlets inside the court campus. Kindly keep the Court campus neat, clean and eco-friendly. If any posters, banners or pamphlets are found strewn inside the Court campus, it shall lead to imposing of penalty up to Rs. 1 lakh against the candidate, whose canvassing material are strewn inside the Court campus and the disciplinary action will also be initiated."

Though, no specific direction was issued by the Bar Council of Delhi regarding strewing of pamphlets around the campus. But it is still in strict violation of the NGTs directions and most importantly, in breach of the Fundamental Duty under Article 51A (g) of the Constitution of India which bestows on every citizen a duty to protect and improve the natural environment.

During elections, every candidate wants to steal the limelight, but strewing pamphlets around should not be the way to do that. The campaigners should keep in mind that the Earth was created for all of us, not some of us.