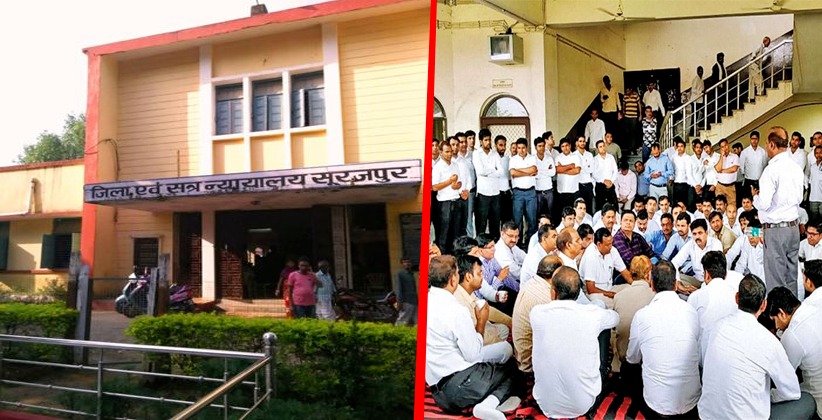 Legal Insiders Nov 24, 2020 Parul Singhal ( Editor: Ekta Joshi ) 12 Shares
12 Shares
On Thursday, (19th November, 2020), lawyers of the Surajpur District Court went on strike to protest against the alleged misconduct of police personnel with advocates. In the morning at the Court premises, lawyers gathered and locked the gates, keeping police personnel from entering the grounds. This comes a day after some police personnel allegedly misbehaved with a lawyer at the executive magistrate’s office in Sector 6.  Ranpal Awana, an advocate with the District Court alleged that, “They misbehaved with him and conduct of the police with lawyers is often like that. We get no support from them, are often insulted at police station and instead of working with us, they often create roadblocks for us”. The protesting counsels alleged that the lawyer who had gone to the Sector 6 office with a client, who had been booked under Section 151 (cognizable offences) of the CrPC, 1973, was told by police personnel to leave and not interfere with their proceedings.  The lawyers said that they will speak with senior police personnel and if they are satisfied with improvements and developments, the strike will be called off but for now, they will continue to protest.  The police officer on this commented, “He kept the executive magistrate like a mere cop even though everything was being carried out in the chamber according to the procedure, thereby reducing the dignity of the proceedings and the officer. He kept on interfering and was warned several times”.  Joint Commissioner of Police Luv Kumar said, “we have spoken to the lawyers and are working on rectifying the situation as soon as possible while listening to both sides”.  Police said they are also working on installing CCTV cameras at the office to keep such issues from arising again in the future.