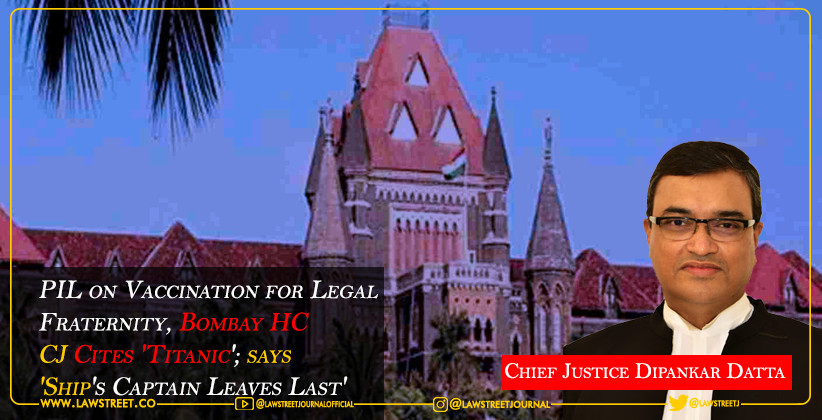 Legal Insiders Mar 12, 2021 Aditi Aggarwal ( Editor: Ekta Joshi ) 4 Shares
4 Shares
The Bombay High Court Chief Justice Dipankar Datta invoked the iconic American epic – Titanic – for expressing his views on a PIL seeking to declare members of the legal fraternity, including Judges, as frontline workers and to vaccinate them for the Severe Acute Respiratory Syndrome (SARS) coronavirus on a priority basis. He said, “When the ship runs into rough weather, the Captain leaves last.”

“Judiciary is declared as one of the essential pillars of democracy. The members who are part of this pillar include the Judges, court staff, advocates and their clerks. Hence they are equally important along with the other staff,” the petition filed by two advocates from Raigad district in Maharashtra, Vaishnavi Gholave and Yogesh Morbale reads.

The hearing began with the court asking the petitioner why such a PIL was not filed for the staff of private organizations and dabbawallas. “That way everyone is a frontline worker,” CJ Datta said. He further said that the executive has done a fantastic job and some things should be left to its wisdom.

“Have you seen the English movie Titanic? Do you recollect the captain of the ship? Captain Smith. When the ship runs into rough weather, what does the captain have to do?”

After which, he added:

“He should be the last one to leave. I am the captain of the ship here. First comes society, then my judiciary and last me.”

Advocate Yashodeep Deshmukh was quick to respond that politicians were also Captains of their ships but they were getting vaccinated. He then requested the court to issue a notice or at least direct the State to consider the representation made to declare members of the legal fraternity as frontline workers. He clarified that he had no grievance against those who are getting it.

“Not every doctor was facing the risk of the virus. Some kept their clinics closed for months. But the State included them because it is a necessity,” he said.

He also said that there were lawyers from legal aid services, who worked tirelessly for the release of undertrials and to decongest prisons.

“The magistrates, public prosecutors who interact with police officers and undertrials, aren't they entitled to vaccination?” the advocate asked.

Answering which Justice Datta said that:

“There is a risk, no doubt. We have to be cautious and careful. But you are asking for a writ of mandamus for the judiciary from the judiciary.”

Additional Solicitor General Anil Singh then informed the court that Bharat Biotech has already filed an application seeking transfer of all these matters to the Supreme Court. The Court said they were not inclined to intervene unless there was something amiss in the policy, but the petitioner had mentioned "access to justice.” However, the division bench of Justices Dipankar Datta and GS Kulkarni sought to know what was the eligibility criteria for getting a Covid vaccine as it is very easy to get a doctor's prescription these days. “So that the noble object is not exploited by scheming people.” The ASG said he would come back with instructions.    The matter has been adjourned to March 17.