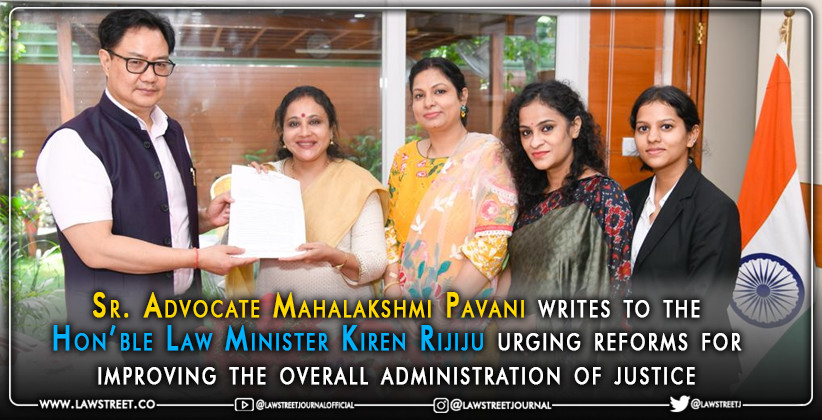 In an attempt to bolster the judicial processes in the country and to bring about certain pressing reforms within the legal realm, Senior Advocate of Supreme Court and President of the Supreme Court Women Lawyers Association - Mahalakshmi Pavani penned a letter to the office of Hon’ble Minister for Law and Justice - Shri Kiren Rijiju.

Addressing ‘Urgent Reforms for Improvement of the Administration of Justice,’ the letter took reliance on the problem of delivering speedy justice as recognized by the respected Law Minister (during his speech at the function organized the Bar Council of India and State Bar Councils on 25.07.2021 and on 4.09.2021 respectively) and stated certain recommendations in line for urgent perusal.

Recommendation for the introduction of a specialized course on ‘Judicial Assistance’:

As part of the said course, where Final year(5th) and Semi-Final year (4th) students of Law should be mandated to work directly with District Courts for a minimum 3-month period wherein they can help the judges in providing them with research material, reviewing the orders made for the day, making case notes, briefing the judge in cases, drafting. Factual aspects of the judgments and so on. This will benefit the young students as well as help in elevating the burden of the lower judiciary’s shoulders.

The letter stated that the said program can be initiated in collaboration with the leading National Law Universities and the University Grants Commission and can also be counted for internship and grading purposes.

Recommendation on women representation in the Higher Judiciary:

Stating that the Ld. Attorney General of India had last year suggested to the Hon’ble Supreme Court to regularly collect data on lady judges in the High Courts and Tribunals and argued for more female representation the Higher Judiciary, Advocate Pavani requested that ‘experienced, integrity-driven, competent and tenacious women practicing in the Supreme Court of India should be considered for appointment to all High Courts.’

“This consideration for sending advocates as judges should be made irrespective of any objection made by the different High Court Bar Associations if the Hon’ble Chief Justice of India and the Hon’ble Minister of Law and Justice are satisfied of their merit and integrity. This would to some measure help in solving the issue of adequate representation of wise, experienced, diligent, and independent lady judges,” Advocate Pavani stated in the letter.

She further added that the President of Supreme Court Bar Association (SCBA) had constituted a search committee and had already provided recommendations to the Hon’ble Chief Justice on the same.

Recommendation on setting up of Evening Courts for hearings of small cause cases:

Lastly, remarking on the pendency of cases pertaining to Motor accident claims and insurance claims, Advocate Pavani recommended setting up ‘Evening Courts’ for 2-3 hours after the normal working hours of the court. She stated in the letter that ‘Judges for such courts can be selected ‘from the pool of retired judges who still wish to provide service to the judiciary at emoluments of half the salary drawn last before retirement, whereas the staff for the evening courts can again be from the retired group of Court staff which still has the energy and dedication to work.’

Advocate Pavani also added, “Evening Court can hear small cause cases, i.e., cases which don’t require more than a predicted finite hearing, such as motor vehicle claims or insurance claims and such cases that the district court in its learned view may think fit. This would again be of dual importance- it would firstly be utilitarian as the same Court complex and facilities can be used by the evening Court, and there won’t be a need for the new establishments; secondly, it would hopefully result in the theme you addressed in your address to the members of the Bar Council of India – Speedy and Effective justice.”

It was further stated that such recommendations, if implemented in the right spirit, will result in improving the vehicle of justice delivery which has for a long time been ailing with an imminent yet solvable crisis. The letter dated September 6, 2021, currently sits with the Honourable Law Minister for perusal.