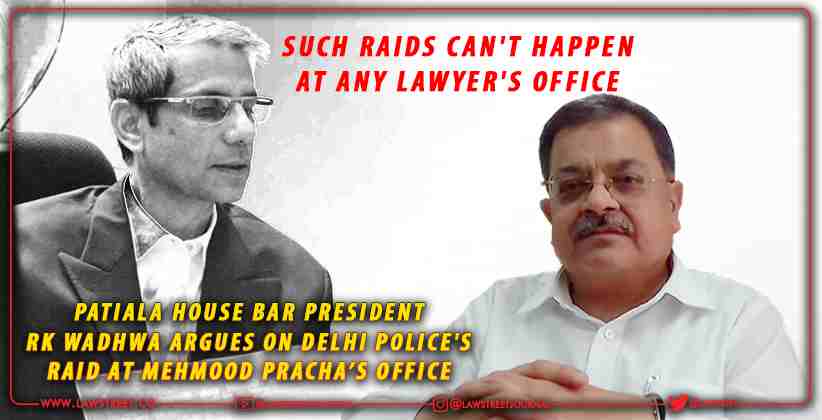 “The Bar is against all this... I am the President of the Bar. I am telling you that whatever you want, I will give. It can't happen that a police personnel can come to your office and take all your data,” Wadhwa said.

Background: Advocate Mehmood Pracha, who appeared as a counsel for the defence in several cases linked to the communal riots that had erupted in Northeast Delhi in February last year, which claimed over 50 lives. On December 24 last year, a team of the Delhi Police’s Special Cell carried out an search and seizure raid, which continued  for over eight hours at the office of the advocate. During the raid, cops insisted on seizing Pracha’s laptop and several documents related to the case files of the riots-related matters.   Submissions by Pracha: The matter was presented before Chief Metropolitan Magistrate at the Patiala House Court, Pankaj Sharma. The Court was hearing Pracha's application highlighting the issues of lawyer-client privilege in relation to the raids conducted at his office. Wadhwa stated that lawyers are protected under Section 126 of the Indian Evidence Act and thus, such raids cannot be allowed by the Court. “This will lead to Delhi Police raiding the houses of lawyers and taking their systems. This is not done...Such raids can't happen at any lawyer's office... Today if we are saying we are ready to give whatever you want, why do you want the entire system?”,Wadhwa asked. Pracha stated that his licence could be cancelled by the Bar Council if he is found to be in breach of lawyer-client privilege, directly or indirectly.   Submissions by public prosecutor: Special Public Prosecutor Amit Prasad in opposition of the application, argued that Pracha's application was not maintainable as it was not borne out of any provision of law. He further said that lawyers could not be differentiated in criminal investigations and thus protection under Section 126 can't be claimed. “The purpose of Section 126 is who can be a witness and to prove what... protection is to the extent that he can't be forced to depose. I'm not asking Mr Pracha to depose.. Section 93 can't be read with 126 and the BCI Rules”, Prasad argued. Prasad also stated that the system (laptop) would be sent to a Forensic Science Laboratory (FSL) for retrieval of target data and that the Police would not have any control over it. Court’s decision: On March 10, the Court had passed an order staying the search warrant. The final order will be pronounced by the court on March 25. After the raid last year, Pracha moved the Patiala House Court in Delhi seeking preservation of copies of the video footage of the raids conducted by Delhi Police at his office on December 24. A Magisterial Court had then directed the preservation of the entire video footage of the police raid at Pracha's premises Also, last week, the Court had reserved its order in Pracha's plea seeking immunity for his privileged client communications in connection with the raids.