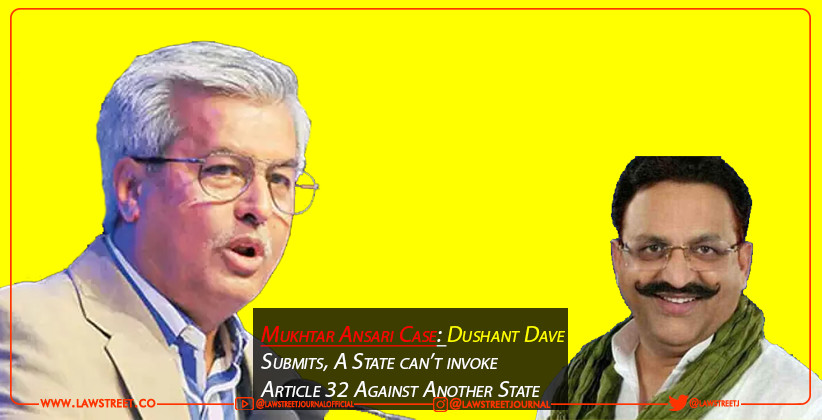 Legal Insiders Mar 05, 2021 Tanya Sehrawat ( Editor: Ekta Joshi ) 4 Shares
4 Shares
Senior Advocate Dushant Dave appeared on behalf of the state of Punjab and Jail Superintendent in Uttar Pradesh Government’s plea which seeks transfer of BSP MLA Mukhtar Ansari from Ropar Jail in Punjab to Ghazipur Jail of Uttar Pradesh. He submitted, “A State cannot invoke article 32 against another State.” The bench hearing the matter was headed by Justice Ashok Bhushan. He also heard the submissions of Advocate Mukul Rohatgi, appearing on behalf of Mr. Ansari. The Solicitor-General, Tushar Mehta appeared on behalf of the state of UP. The matter is supposed to be continued on Thursday (March 4, 2021). Proceedings Today

Today’s hearing (March 3, 2021) was started by submissions of Advocate Rohatgi. He stated that he had earlier for the transfer which was followed by the court passing an order that the transfer won’t be necessary, and Ansari had an option to go for video-conferencing. He had requested the bench that he should be sent to Delhi as there was threat to his life in case the subject matter is transferred to UP.

He said, “Shifting me to Delhi would probably be the best. The government of UP also says that there is a problem with me being in Punjab. This can be resolved if the cases are shifted to Delhi and I am also shifted to Delhi.” The bench conveyed that it would take this into account.  This was followed by the submissions of Tushar Mehta on behalf of UP. He said that Ansari was mocking the system and could be almost seen following the script of a Hindi movie along with taking the judicial system for a ride. The SG also said that he had clearly disregarded the Criminal Procedure Code when taken out of custody and handed over to Punjab Police.

He further stated: “First of all, he could not have been brought out without order of the judge. Then he was taken to Punjab and produced there. Then instead of bringing him back to UP, he was housed in Punjab", submitted the SG. He went on to aver that the Punjab Police had not done anything even after two years; the hey had not placed any material before the Court. "The Punjab Police in collusion with this man are dodging the judicial system. He procured a medical certificate saying that he cannot travel, but he has been travelling to Delhi. True facts are being suppressed.”

It was further alleged by the Solicitor General that Ansari was carrying his illegal activities from within the jail premises as well and the same were being ignored by the Punjab authorities willingly. Apart from this, he also stated that all of his summons had been avoided on the ground of being medically unfit when his report stated a mere sore throat, skin disease and back ache, etc.  Lastly, it was further argued by him that since the state had a duty to ensure justice towards the citizen so the petition pertaining to Article 32 was maintainable before the Supreme Court.  After this, Dushant Dave took the lead to present his submissions on behalf of the state of Punjab. He stated, “the matter has far-reaching consequences. This has nothing to do with Ansari. If he is a criminal, he is a criminal.”  He also went on to highlight that filing a petition under Article 32 and a state raising allegations on another was bad in law. He questioned, “can article 14 and 21 be utilised by the state? Can they invoke it? Journalist Siddique Kappan was arrested by UP Police. Can state of Kerala seek for him to be brought back to Kerala?” The matter was adjourned after this and shall be continued tomorrow.  Brief Background of the case

The writ petition filed against the BSP MLA for his transfer alleged pending serious offences in the state against Ansari and that his transfer is significant pertaining to his appearance in those cases. However, it was also submitted that Ansari has not been handed on medical grounds as the Superintendent of Ropar Jail.

The SG, Mehta had stated that government of UP was defending a terrorist along with supporting him.  A counter-affidavit had been filed by Ansari in the plea by the state. It objected to the maintainability of the petition. The ground for the said objection was that there had been no violation under Part III of the Constitution and henceforth, a petition under Article 32 will not be maintainable.  In the counter-affidavit he had said, A State has no fundamental right guaranteed to it under the Constitution and one State cannot prosecute another State in a writ petition under Article 32 of the constitution as it is against the federal scheme.”