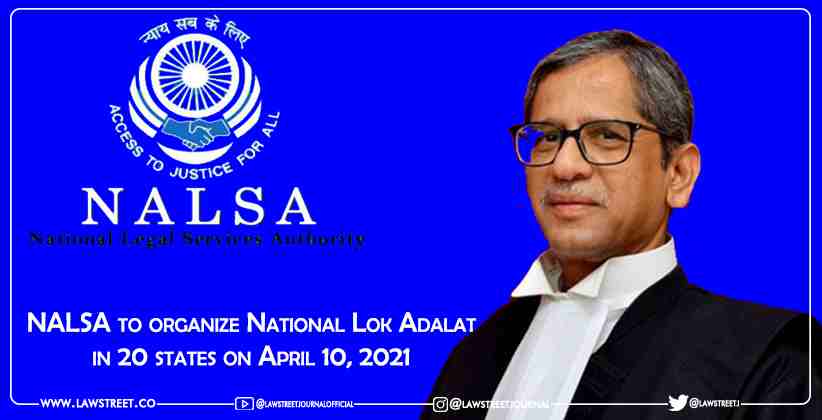 Due to the ongoing pandemic, 16 State Legal Services Authorities have decided to postpone the Lok Adalat. Only 20 states will now organize their respective event from the set date which may be both physically and virtually. Postponement of the event in some states

According to a press report by NALSA, the SLSAs in Maharashtra, Chhattisgarh, Delhi, Daman and Diu and Dadar and Nagar Haveli have postponed the organization of the event till any further notice.

The remaining 11 states have declared a future date for organizing the event. Overview of the event held in Karnataka The Karnataka State Legal Service Authority preponed its National Lok Adalat to 27th March 2021. The Karnataka SLSA established more than 960 benches at multiple districts, wherein more than 5.44 Lakh cases were taken up out of which more than 3.3 Lakh were disposed involving around rupees 1000 crores of the settlement amount. Other details Over the course of this year, three National Lok Adalats will be organized on 10th July, 11th September and 11th December.

The Legal Services Authorities have developed the capacities to organize pan India events. These events have spanned over to the remote districts of the country. Despite the prolonging pandemic the legal services authorities organized the events in the year 2020 wherein over 12.6 lack pre litigation and over 12.8 lakh pending cases were settled amicably.

The Legal Services Authorities also switched to Online Dispute Resolution Mechanisms and introduced E-Lok Adalats in the month of June 2020.  The events have received an eloquent response from the general public as the parties can participate from their home/workplace.  Till now 24 SLSAs have organized the events and the same are to be incrementally introduced in other states.

Judiciary Jul 26, 2018 Editor : Shreya Bansal 0 Shares
0 Shares
The Supreme Court on July 25th, 2018 said that a scheme proposed by the National Legal Services Authority (NALSA) for compensating victims of sexual assault and acid attack should be modified to some extent to make it applicable to child victims of sexual abuse.A bench of justices Madan B Lokur and Deepak Gupta accepting the Scheme called ‘Victim Compensation for Survivors of Sexual Assault and Acid Attack -2018’ has told senior advocate Indira Jaising, who is assisting the court as an...
Read full post