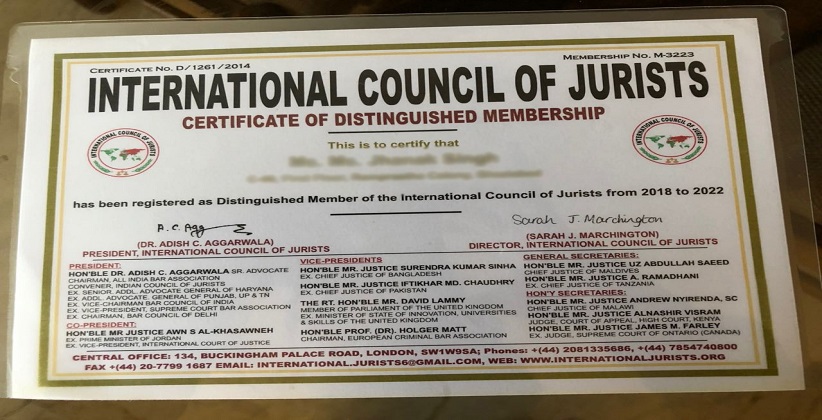 The 2018 BCD campaigning scam is probably the most astonishing scam in the history of Bar Council of Delhi. But as the events have turned on Dr. Adish C. Aggarwala and Adv. Amish Aggarwala even more astonishingly have denied any responsibility for the act in which they have granted membership of International Council of Jurist to lawyers enrolled in Delhi.

In a legal notice sent to LawStreet Journal by Adv. Abhinav Singh on behalf of Dr. Adish C. Aggarwala and Adv. Amish Aggarwala, they asserted that the documents are forged and fabricated.

This raises some serious questions as to who is sending the letters in the name of Dr. Adish C. Aggarwala and Adv. Amish Aggarwala, during the BCD elections trying to influence the voters.

Few facts are essential to bring to the light in this regard, firstly, the envelope containing the letters bears a postal stamp of the India post containing a valid number which is verifiable. Secondly, the envelope also exhibits the official logo of Adv. Amish Aggarwala with his name, designation and contact details. Thirdly, the letters written by Dr. Adish C. Aggarwala and Adv. Amish Aggarwala, exhibits their respective signatures.

Moreover, how it is possible for such a large scale act to ensue without the knowledge of Dr. Adish C. Aggarwala and Adv. Amish Aggarwala or even the International Council of Jurist, which has some esteemed members as its office bearers.

The competition in the 2018 Bar Council of Delhi elections is fierce, but no candidate is allowed to indulge in unscrupulous practices. More so when the Supreme Court on March 23rd, 2018 in the case of AjayinderSangwanv. BCI, has given effect to the BCI resolution in which it is stated that if any candidate is found using any sort of unfair means, corrupt practices or bribing the voters, he/she should be debarred from contesting elections.

In the legal industry, professionalism is at its optimum priority. Lawyers cannot play with the integrity of the legal profession which is considered as a religion in the fraternity, and if any lawyer is found to have breached any law, then judicial action should be taken against them.